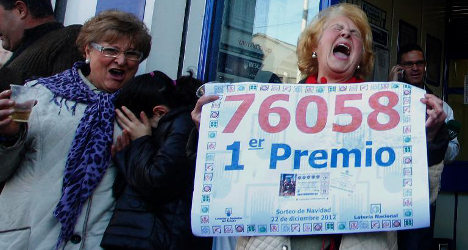 Touched by the 'Fat One': People celebrate after winning the first prize of 'El Gordo' in Granen, near Valencia, in 2012. Photo: Jose Jordan/AFP

Hundreds queued up to buy tickets outside the Dona Manolita lottery store in central Madrid, which is known for having sold several winning tickets for "El Gordo", or "The Fat One".

The lottery will distribute up to €2.24 billion ($3.1 billion) overall in Sunday's draw, with punters paying a minimum of €20 for a "décimo" — the cheapest ticket stub on sale.

The top winnings for a single décimo with the winning number is €400,000.

"It dampens your enthusiasm a bit, but what are you going to do?" said Juan Jose Perez, a 29-year-old dentist, queuing to buy two décimos at Dona Manolita.

The top prize, "El Gordo" itself, is €4 million for a full set of 10 winning décimos. A total of 1,600 décimos with the winning number have been put up for sale.

"If I won a lot of money I would set up my own clinic," said Perez, a multicoloured scarf tied tightly around his neck to guard against the cold.

Among the most popular numbers in this year's draw is 28213, after the date when Benedict XVI resigned as pope — February 28, 2013 — said Zurine Saez de Viteri, head of online lottery sales company Ventura24.es.

Millions of Spaniards will be glued to their televisions on Sunday to hear children from the San Ildefonso college sing out the winning numbers.

Spending on the Christmas lottery has fallen steadily since Spain's property-led economic boom collapsed in 2008, sending the jobless rate soaring to 26 percent.

Each Spaniard will spend an average of €65 on the draw this year, less than half the amount they shelled out in 2008, according to independent consumers' association FUCI.

The Spanish government, which has launched tough economic reforms to stabilize the public finances, receives 30 percent of the revenues from ticket sales, less the running costs.

The Christmas lottery has been held uninterrupted since 1812.

Even Spain's 1936-39 Civil War did not shake its grip, as each side held its own draw during the conflict.

It has become an important Christmas tradition in Spain, with friends, coworkers and bar regulars banding together to buy tickets.

"The lottery is part of Spaniards' DNA. Throughout our lives we are used to having this draw at Christmas," said Juan Antonio Gallardo, commercial director of the LAE whose office was decorated with a Spanish flag.

Millions of Spaniards will be glued to their televisions on Sunday to hear children from the San Ildefonso college, dressed in navy blue and grey uniforms, sing out the winning numbers live in a draw lasting over three hours.

Although other draws around the world have bigger individual top prizes, Spain's Christmas lottery ranks as the world's richest for the total sum paid out.

Unlike other lotteries that generate just a few big winners, Spain's Christmas draw gives away thousands of smaller prizes as well as its jackpots.

Participants have an almost one-in-six chance of winning something.

"It is a draw with huge social roots in Spain," said Saez of Ventura24.es.

"Everyone knows somebody who has won a prize in the Christmas lottery, even if it is a small amount."