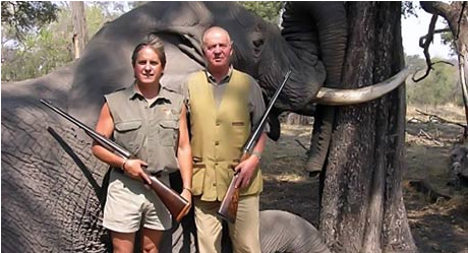 King Juan Carlos' passion for hunting came under fire in 2012 when photos of him standing in front of a dead elephant while on holiday in Botswana were leaked to the press. Photo: YouTube

The Spanish monarch may have splashed out €1,800 per square metre on a lavish 1,700sqm lodge close to the Zarzuela Palace on the outskirts of Madrid, where Spain's Royal Family resides.

These are the claims made in Telecinco's TV programme El Programa de Ana Rosa, who added that the high plumbing, electrical and carpentry costs took the grand total spent to €2 million.

The TV report also states the pavilion's ceilings are high enough to house large stuffed animals such as elephants or giraffes.

"The building of the country estate wasn't made public in 2007 because of a clause which states that any construction that takes place on Zarzuela Palace land cannot be publicized for security reasons," sources at Patrimonio Nacional (Spain's National Trust) told The Local.

"As far as we know, every royal family in Europe has a similar type of outbuilding on their land."

King Juan Carlos' passion for hunting came under fire in 2012 when photos of him standing in front of a dead elephant while on holiday in Botswana were leaked to the press.

The Spanish public’s reaction was to condemn the monarch, not only for killing an endangered species, but for splashing out on lavish hunting expeditions at a time when ordinary Spaniards were struggling.

But it wasn't the first time the monarch had been involved in hunting scandals.

In 2006, he faced allegations he had shot a drunken Russian bear that had been stuffed full of honey and vodka.

Many people in Spain believe that, when he was a teenager, the king-to-be accidentally shot and killed his brother while they were cleaning a gun.