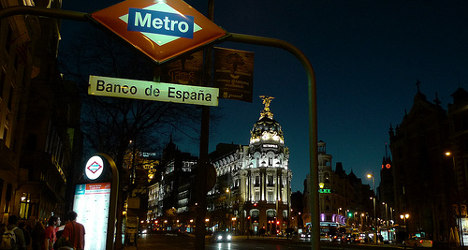 The level of bad loans — ones judged highly unlikely to be repaid — rose to 13 percent of all outstanding credit from 12.68 percent in August, figures from the Bank of Spain showed.

It was the highest rate since current records began in 1962.

The value of the risky loans, mostly linked to the collapsed property sector, climbed by €3 billion euros from the previous month to €190.97 billion ($263 billion) in September.

Last year, the eurozone offered a loan of up to €100 billion to shore up the balance sheets of Spain's banks, swamped in bad loans since a property bubble imploded in 2008 plunging the country into a recession.

Spain, the euro zone's fourth-biggest economy, has drawn €41.3 billion euros from the rescue loan, which expires at the end of January.

Two of the international bodies behind the bailout, the European Commission and the International Monetary Fund, on Monday warned Madrid to be vigilant as the bailout winds up.

They said the sector was on the way to recovery but warned that lending to businesses had yet to pick up as economic risks remain for Spain. They urged Spain to monitor the recovering banking sector carefully.