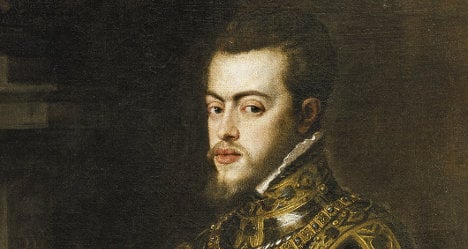 This Spaniard was King of England in the 16th century. Photo: Wikimedia

The rankings point to Jesus Christ as the most important man in history, while French emperor Napoleon Bonaparte came second and the Prophet Mohammed was third.

Also in the top ten are Adolf Hitler — at number seven — and Abraham Lincoln who nabbed the fifth spot.

But only one Spaniard in the top 100: is 16th century King Phillip II of Spain in 87th place.

Under Philip II Spain, reached the height of its imperial power, with its empire stretching across Europe and the Americas and into south-east Asia. The Philippines are named after the king.

Philip II— who married Mary I of England and served as King of England, Ireland and Portugal at various points — was given the rating in a table created by Google engineer Charles Ward and Steven Skiena.

The programme trawls the web for opinions expressed about famous people and then uses a special 'reputation decay algorithm' to determine the significance of the world’s most important figures and how it would change after 200 years. They published their findings in a new book entitled "Who's Bigger".

For Ward and his team it was not important the reason why the figures were famous just that their fame stands the test of time.

Critics have pointed to the authors' use of English-language only Wikipedia and Google ngrams as the basis of their research. The use of the error-prone Wikipedia where only 15 percent of editors are women has also been criticized.

Only three women made the top 100: Queen Elizabeth I of England is the 13th most important person in history, Queen Victoria is 16th, and St. Joan of Arc is 95th.

But the authors say they are not making a value judgement, just assessing significance over time.

In terms of other Spaniards, the dictator Francisco Franco comes in at 291, while current Prime Minister Mariano Rajoy is in place 71,474.

The list throws up some other interesting facts. Former South African President Nelson Mandela is ranked down at 356 while current US president Barack Obama is number 111.

13. Elizabeth I of England

39. Charles I of England