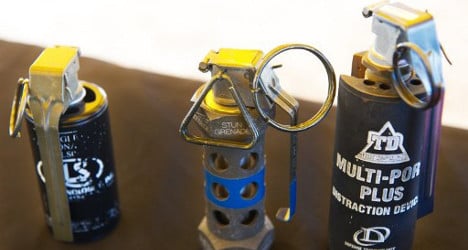 The blast caused the victim to lose all of his left testicle and most of his right. Photo: Paul J. Richards/AFP

Spain's Supreme Court ruled on Tuesday that the Barcelona Mosso D'Esquadra policeman should be suspended from his post and spend a year in jail for the events which took place in 2008.

The aggressor was part of a tactical unit tasked with arresting two extortionists with a history of violence, Spanish daily 20minutos reported on Tuesday.

The squadron's commanding officer gave his men the order to arrest the suspects when they were getting into their vehicle.

He authorized the use of stun grenades as the extortionists were known to be martial arts experts and also owned two dangerous dogs.

The aim was to destabilize the suspects as stun grenades cause temporary loss of hearing and balance when detonated.

But when the suspects refused to get out of the vehicle, the officer in question threw his stun grenade on one of the men's lap.

The blast caused the victim to lose all of his left testicle and most of his right.

The gross negligence with which the officer acted not only left the 25-year-old man infertile for the rest of his life but was the principle reason for the policeman's sentencing.