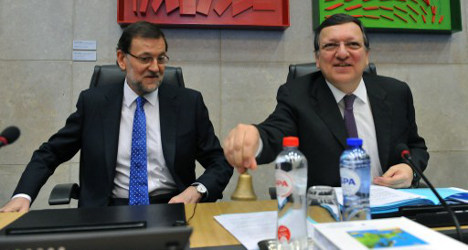 "The process of restructuring of banks having received state aid is well underway," the European Commission said in a statement, following its latest visit along with the International Monetary Fund to assess Spain's progress.

"Efforts under the program have made the banking system stronger, safer, and leaner, as has important policy progress at the European level," the IMF said in a separate statement.

They warned however that lending to businesses had yet to pick up as economic risks remain for Spain, which timidly emerged from recession in the third quarter of this year.

They urged Spain to meet its tough financial targets and push on with reforms to ensure a return to growth, while monitoring the recovering banking sector carefully.

Completing the reform agenda will be "imperative" to return the economy to sustainable growth, the commission said.

"Continued in-depth diagnostics of the shock resilience and solvency of the Spanish banking sector remain vital" as they clean out their bad assets, it added.

Spain has drawn €41 billion ($56 billion) from a €100-billion credit line offered by the international bodies in July 2012 to the banks, which expires at the end of January.

The banks were laden with bad loans from a real estate crash in 2008, which threw the euro zone's fourth biggest economy into a double recession and left millions jobless.

Spain officially emerged from a two-year recession — the second since the beginning of the country's crisis — in November with third quarter growth 2013 of 0.01 percent growth. However, unemployment remains at  25.98 percent.

In August the IMF forecast that unemployment in Spain would remain above 25 percent until 2018 while a recent PwC report said Spain would have to wait until 2033 to see pre-crisis unemployment and growth levels.

Prime Minister Mariano Rajoy's conservative government is forecasting a 1.3-percent economic contraction in 2013 and 0.7-percent growth in 2014, a rate considered by many analysts to be insufficient to lead to net job creation.

The Bank of Spain, International Monetary Fund and European Commission are tipping an economic decline of between 1.4 and 1.6 percent this year.