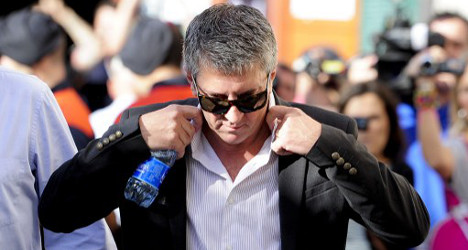 "He had nothing to do with this firm," the source said, playing down a report in Spanish daily El Mundo, which had described Messi senior as being "at the centre" of the affair. Photo: Josep Lago/AFP

Neither the 26-year-old Messi, nor his relatives, nor other football stars who played in the charity games were suspected of any wrongdoing, said a source close to the police investigation.

"There is a Colombian company that laundered money and also organized charity games," said the source, speaking on condition of anonymity.

There was no evidence, however, that the "Messi and Friends" charity football games were themselves linked to money laundering, the source said.

The Argentine international's father, Jorge Messi, represented the player for his participation in the charity games but had no link with the Colombian company or knowledge of illegal acts, the source said.

"He had nothing to do with this firm," the source said, playing down a report in Spanish daily El Mundo, which had described Messi senior as being "at the centre" of the affair.

The Colombian company, which has not been identified, organised the "Messi and Friends" games and other charity events including concerts, the source said.

According to the source, police took statements from several Barcelona players but they were unaware of any illegal activity. El Mundo named the players as Messi, Dani Alves, Javier Mascherano and goalkeeper Jose Manuel Pinto.

A Madrid examining magistrates' court, presided over by Judge Eduardo Lopez Palop, is supervising the investigation of the case, which has been placed under seal, judicial sources said.