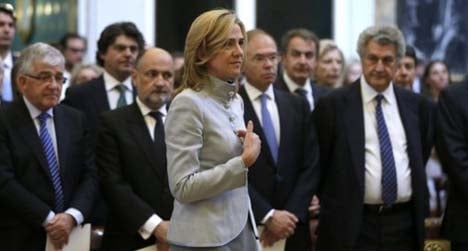 The king’s youngest daughter Cristina, 48, would be his first direct relative ever to appear in court accused of wrongdoing if the judge investigating the case summoned her as a suspect.

The court on the island of Mallorca is investigating Cristina’s tax affairs and has said it will decide within weeks whether to formally summon her as a suspect.

So far, apart from Manos Limpias, “no other plaintiff has come forward over the allegations being handled by the judge,” said a court official, who asked not to be named.

The tax authorities have not brought any charges against Cristina and public prosecutors have said there is no case to answer.

The head of the state prosecution service, Eduardo Torres-Dulce, last month denied any favouritism towards her.

Cristina is linked to the business affairs of her husband Iñaki Urdangarin, who is under investigation for alleged embezzlement of public funds.

Neither has so far been charged with any crime, but the investigations have thrown the family of Juan Carlos, 75, into the biggest scandal of his four-decade rule.

Judge José Castro in the Mallorca court is investigating allegations that Urdangarin and a former business partner embezzled €6 million euros ($8 million) in public funds via the Nóos Institute, a charitable foundation that he chaired.

The scandal, along with the king’s health problems and discontent over the recent recession, has raised debate about his future reign.

Manos Limpias occupies the extreme ground of right-wing politics in Spain, where allegiances are divided concerning the monarchy. In the absence of any major far-right political party, it pursues its agenda largely through lawsuits.