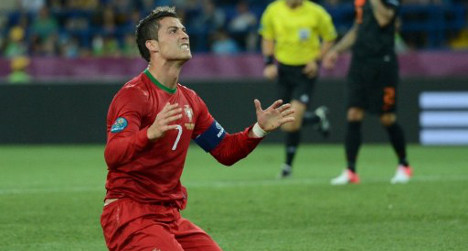 The Portuguese won the award in 2008 but he has had to watch it being handed over to Argentine archrival Messi in every year since. Photo: Francisco Leong/AFP

"I am convinced he will win because it would be an injustice if he didn't when everyone knows he's the best player in the world," the Real president told reporters during annual Christmas drinks with the media.

Ronaldo has been shortlisted alongside Barcelona forward Lionel Messi and Bayern Munich's French winger Franck Ribery for the Ballon d'Or, which is to be presented in Zurich on January 13.

The Portuguese won the award in 2008 but he has had to watch it being handed over to Argentine archrival Messi in every year since.

This year, the injury-hit Messi seems to be less of a favourite while Ronaldo has been dazzling on the pitch. On Tuesday, he became the first player to score nine goals in the group stages of the Champions League as Real won 2-0 away at FC Copenhagen.

Nevertheless, the 28-year-old striker was clearly upset by recent comments by FIFA president Sepp Blatter, who described Ronaldo as a "commander" and mocked his demeanour on the field. Blatter also said he personally preferred Messi as a player.

Questioned by reporters, Ronaldo later refused even to confirm he would attend the Ballon d'Or ceremony this year.

But Real's chief was confident the player would turn up. "Until now he has always gone to the awards," Perez said.

The club president said he hoped Real would win their longed-for 10th Champions League trophy. "It would be a gift for all our fans, especially for our members," he said.

Perez added he and coach Carlo Ancelotti are hoping Xabi Alonso will extend his contract, which expires next summer. "He knows we would be delighted if he carries on with us next season," said Perez.

The Real chief said he had not heard anything from club officials of a possible departure by Argentine international Angel Di Maria, who has lost his starting place in the team.

"I asked and they told me no-one had approached the club," Perez said.