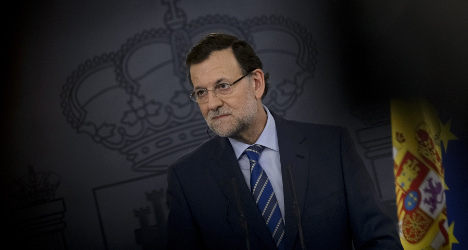 A few hours after Catalan political chief Artur Mas unveiled the date and wording of the poll, the Spanish leader refused even to countenance a break-up of the nation.

"It is unconstitutional and it will not take place," Rajoy told a news conference.

"This initiative collides head-on with the foundation of the constitution which is the indissoluble unity of the Spanish nation," the conservative prime minister said.

Mas' governing alliance and other nationalist parties in the region had agreed to put two questions to voters next year:

– "Do you think that Catalonia should be a State, yes or no?"
– "If yes, do you want that State to be independent, yes or no?"
Mas said a majority of parties in Catalonia, but not all, backed the referendum.
"There will be time for the Spanish state to negotiate with the Catalan institutions over how to hold this consultation in accordance with existing legal norms," Mas said.
Proud of their distinct language and culture and fed up after five years of stop-start recession, many of the 7.5 million people in Catalonia want to redraw the map of Spain, saying they feel short-changed by the central government which redistributes their taxes.
But Rajoy swiftly squashed any hope that Madrid would consider allowing the creation of a new nation nestled between France and Spain.
It is up to all Spaniards to decide on the shape of their country, he said.
"No government can surrender what belongs to the Spanish people," the Spanish leader said.
Rajoy said he regretted initiatives that "splinter society, feed division and generate deep uncertainty". He called directly on Mas to respect "the political commitment he assumed not to break the law".
European Union President Herman Van Rompuy, who was in Madrid for talks with Rajoy, told the same news conference that he was "confident" Spain would remain united.
He warned, too, that any new independent state would have to apply to become a member of the European Union, subject to ratification by all member states.
Spain's main opposition socialist PSOE party also condemned the planned referendum, with party leader Alfredo Pérez Rubalcaba saying regional president was "leading Catalonia up a blind alley".
Catalonia was there at the symbolic birth of Spain when Queen Isabella of Castile and King Ferdinand of Aragon, a region that included Catalonia, married in 1469.
Now Catalonia accounts for one-fifth of Spain's total output and an even greater share of its exports.
But a recent poll by the Catalonia Centre for Opinion Studies (CEO) showed that those favouring greater autonomy or outright independence far outweighed those who wanted to stick with Spain.
The CEO poll published on November 22nd showed support in the region for independence to be at 54.7 percent. Another recent poll by the Spanish government's CIS institute had this support at 40.6 percent.
On September 11th, Catalonia's national day, hundreds of thousands of Catalans massed in a vast human chain stretching across the region to demand independence.
The national day recalls the conquest of Barcelona by Spanish king Philip V's forces in 1714.
Spain's regions gained a large degree of autonomy, including responsibility for health and education, after the 1975 death of General Francisco Franco, who had centralized power in Madrid.
Many Catalans point to Scotland, whose leaders have called a referendum next September on independence from Britain — a move authorized by the British government.
Rajoy said in an interview this month that Catalonia could not hold a referendum like Scotland because Spain, unlike Britain, has a written constitution that rules out such a move.
Don't miss stories about Spain, join us on Facebook and Twitter.