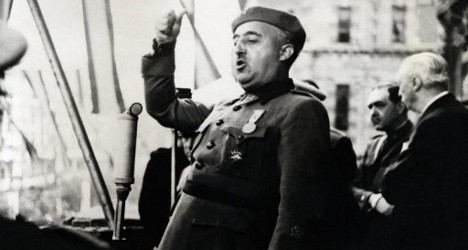 Franco ruled Spain from the end of the country's 1936-39 civil war until his death in 1975 and brutally oppressed political opponents during this period. Photo: AFP

The proposal to remove the honour, which was awarded to Franco in March 1939, will be voted on at a general meeting of the association on Thursday, a spokesman for the association said.

It was made by the Free Association of Lawyers, an industry group, which argues that the honour violates a 2007 law passed by Spain's previous Socialist government which bans Francoist symbols from public places.

Keeping Franco as an honorary dean also "does not correspond with the democratic spirit and defence of human rights" which is the Bar Association's mission, the proposal by the association added.

Under the Historical Memory Law, governments around Spain are obliged to remove symbols of the Franco dictatorship from all public buildings and spaces.

Thirty-eight years after the dictator's death, Spaniards remain divided over the final resting place of his body, which lies in a controversial monument carved into a mountain near Madrid.

The anniversary of his death last November was marked by both right-wing and anti-fascist demonstrations across Spain.

Franco ruled Spain from the end of the country's 1936-39 civil war until his death in 1975 and brutally oppressed political opponents during this period.

Madrid's Bar Association has around 65,000 members who will be able to vote on the proposal next week.