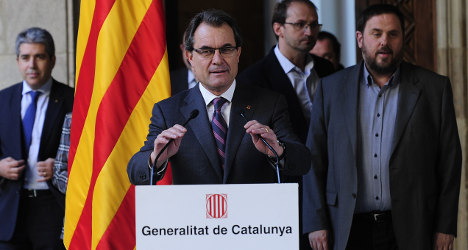 A grouping of parties led by Artur Mas's governing CiU alliance agreed to put two questions to voters, asking first: "Do you think that Catalonia should be a State, yes or no?" Photo: Str/AFP

The parties agreed in principle to ask residents on November 9, 2014, whether they think Catalonia should be an independent state, regional leader Artur Mas told reporters.

The Spanish central government has vowed to block any such referendum.

Proud of their Catalan language and culture, but suffering in an economic crisis, many of the 7.5 million people in debt-laden Catalonia say they feel short-changed by the central government which redistributes their taxes.

A grouping of parties led by Mas's governing CiU alliance agreed to put two questions to voters, asking first: "Do you think that Catalonia should be a State, yes or no?"

The second question for voters in the referendum would be: "If yes, do you want that State to be independent, yes or no?"

"We have an agreement in principle to hold the consultation next year" on November 9th, Mas said.

The agreement now has yet to be formally approved by each of the parties internally.

Prime Minister Mariano Rajoy's conservative government refuses to countenance a break-up of Spain, and has vowed to block a referendum on constitutional grounds.

Mas insisted on Thursday: "There will be time for the Spanish state to negotiate with the Catalan institutions over how to hold this consultation in accordance with existing legal norms."

But Spain's government was quick to respond, saying on Thursday it would block Catalonia's plan to hold an independence poll next year.

"The poll will not be held," Justice Minister Alberto Ruiz-Gallardon told journalists just moments after Catalonia's president Artur Mas announced a deal among regional parties for the date and wording of a referendum.

Catalonia has long been considered an engine of Spain's economy, but it has suffered in the economic crisis of recent years.

On September 11th, Catalonia's national day, hundreds of thousands of Catalans massed in a vast human chain stretching across the region to demand independence.