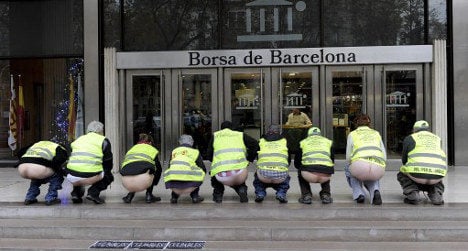 The group of ten were protesting government cuts to social programs in Spain's Catalonia region.

Their peculiar protest was a homage to Catalonia's regional Christmas decorations — the Caganers — which feature crib figurines squatting while doing their business.

One Iaioflauta activist said, "Iaioflautas came here to do our crap against this government that is impoverishing us".
The word 'iaioflauta' is a blend of the Catalan term 'iaio', meaning gramps, and 'perroflauta' or hippy. The group are very active across Spain.
They previously carried out an Occupy Wall Street-style demonstration at the Barcelona stock exchange in 2012.

"We don’t want our children and grandchildren to inherit a society worse than the one we've lived in," member Paco Gonzalez, 60, told the Washington Times in 2012.