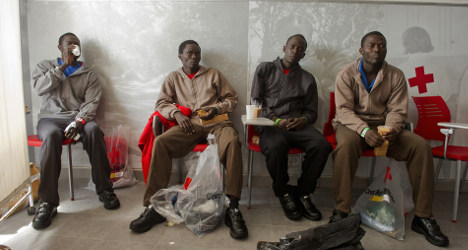 On Sunday rescuers and police said 44 migrants were intercepted in Spanish waters, while another 46 were rescued on Saturday, a local government official said.

In Murcia, south eastern Spain, coastguards spotted two boats 10 nautical miles from the coast and sent out an alert at 2.20am, a spokesman for the local municipality said.

"Nine men were on board the first boat and eight on the other," the spokesman said, adding they were North African and in good health.

At 4am the Red Cross came to the aid of "eight Algerian men" near the resort of Torrevieja further north, two of whom were suffering from hypothermia, the NGO said in a statement.

A fourth boat carrying 19 North Africans was intercepted near the Canary Islands on Saturday night, a spokesman for the Civil Guard said.

Another four boats had been rescued on Saturday, carrying a total of 46 people, including three women, government and maritime officials said.

Thousands of undocumented migrants from Africa try to cross the 15-kilometre (nine-mile) strait from Morocco into Spain on makeshift boats and inflatable dinghies each year.

Spain's maritime rescue services have picked up 1,396 migrants from boats off of its coast between January 1st and September 16th, compared to 1,709 during the same period last year.

Thousands of migrants also try to enter Spanish soil overland by scaling the border fences that surround Ceuta and Melilla, two Spanish exclaves surrounded by Morocco that have the European Union's only land borders with Africa.

Recently Spain's Government caused controversy when they reinstalled razor blade on those borders.

The country's socialist opposition PSOE party then suggested Spain look at using high-tech technologies such as drones to patrol the borders of the two autonomous cities.