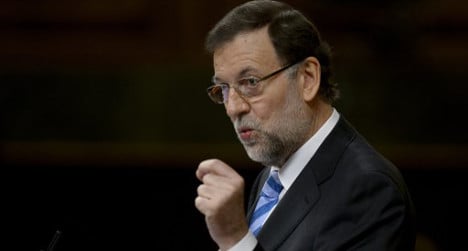 "I don't know of a single politician implicated in a corruption investigation who still holds a public post," Rajoy argued in the interview. Photo: Dani Pozo/AFP

Lower wages were "one of the keys" to overcome the economic crisis, he said in an interview with several European newspapers including Spain's left-leaning El Pais daily.

"In difficult situations, it is better to bet on earning a little bit less and maintain as many jobs as possible," Rajoy said.

"The latest jobless figures can't satisfy anyone, but they show us that there can be hope".

The number of people registered as unemployed in Spain fell slightly to 4.8 million in November. It was the first drop in registered unemployment in the month of November — traditionally a difficult month — since the figures were first compiled in their current form in 1996.

After the destruction of millions of jobs since a decade-long property bubble imploded in 2008, the news fed growing optimism that the worst may be over for the eurozone's fourth-largest economy.

In the third quarter, Spain emerged from recession with 0.1-percent growth but still posted an official unemployment rate of 25.98 percent, which is calculated in a separate, quarterly household survey.

Rajoy's conservative government has passed reforms that make it easier for companies suffering a downturn to fire workers, reduce severance pay and prevent unions from being able to cling to wage deals made during the boom.

"A more flexible economy allows alternatives to dismissing workers, and that has allowed the unemployment situation to stabilize," Rajoy said.

Rajoy said another forthcoming reform will allow for greater use of part-time contracts but vowed not to scrap the minimum wage.

Average household income has fallen by 9.5 percent between 2008 and 2012, according to national statistics agency INE.

Salaries dropped by 12 percent between 2010 and 2012, according to a study by think tank Fedea.

During the course of the interview, Rajoy also argued that more European unity was necessary and said a banking union for the region should be finalized by the end of the year.

"In Europe, the worst is over and growth and integration are next," he stated.

What concerns me the most is that all European governments, especially that of Germany, which in terms of population and GDP is very important, have a clear view of where we are going."

The Spanish PM was also quizzed on the recent corruption scandals which have plagued his party.

"I don't know of a single politician implicated in a corruption investigation who still holds a public post," Rajoy argued.

He continued to deny all allegations of illegal party financing carried out by former treasurer Luis Bárcenas.

"If someone has different accounts, they are theirs, not the PP's."