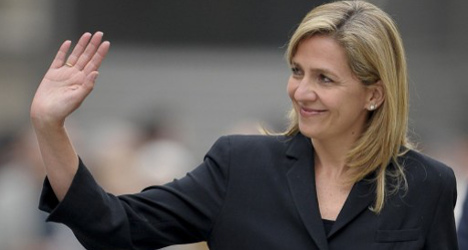 Cristina is linked to the business affairs of her husband Inaki Urdangarin, who is under investigation for alleged embezzlement of public funds. Photo: Josep Lago/AFP

The king's youngest daughter Cristina, 48, would be his first direct relative ever to appear in court on suspicion of wrongdoing if the judge on the Balearic Islands decided to summon her for questioning.

Having gathered documents on her tax affairs, the judge in Palma de Mallorca gave prosecutors and other parties in the case until next week to present any charges, he said in a written ruling Monday.

The judge, Jose Castro, will then decide in late December or early January whether to summon her formally as a suspect—a step towards bringing formal charges, a court source added separately.

Cristina is linked to the business affairs of her husband Inaki Urdangarin, who is under investigation for alleged embezzlement of public funds.

Click here to read Ten things the Princess bought with your money.

She avoided being summoned as a suspect in that case, but Castro has launched a separate enquiry into tax evasion and money-laundering allegations against her.

Neither Urdangarin nor Cristina have so far been charged with any crime.

Public prosecutors have said there are no grounds to make Cristina a formal suspect but the final decision lies with the judge.

The investigations into Urdangarin and Cristina have thrown Juan Carlos's family into the biggest scandal of the 75-year-old king's four-decade rule.

Castro is investigating allegations that Urdangarin and a former business partner embezzled €6 million in public funds via the Noos Institute, a charitable foundation that he chaired.

The scandal, along with the king’s health problems and discontent over the recent recession, has raised debate about his future reign.

The king has appeared increasingly frail and had hip surgery last month, his ninth operation in just over three years.