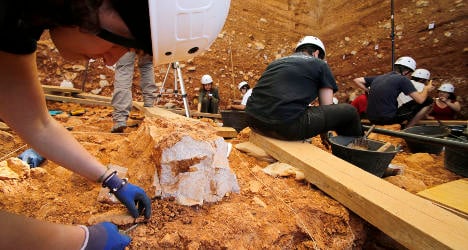 The DNA found in Spain's Burgos province dates back over 300,000 years while the previous oldest was less than 100,000 years. Photo: Cesar Manso/AFP

But cutting-edge analysis of a femur found in the so-called ‘pit of bones’ in Burgos’ Atapuerca Mountains revealed an almost complete mitochondrial genome sequence.

The discovery shows the history of humans in Europe is far more complicated than previously thought.

The scientists from Spain’s Atapuerca research team and Germany’s Max Planck Institute were expecting the DNA to most closely related to Neanderthal genetic material, as with other fossils found at the Spanish site.

Instead, the closest relatives were the Denisovans, an eastern Eurasian sister group to Neanderthals.

These two groups appeared hundreds of thousands of years ago, or long before modern-looking humans made their exodus from Africa more than 60,000 years ago.

The results suggest "the evolutionary history of Neanderthals and Denisovans may be very complicated," said chief study author Matthias Meyer of the Max Planck Institute.

Future studies will look at how an early human species in Spain ended up containing DNA from another group in Siberia as scientists continue to try and piece together the early history of humankind.