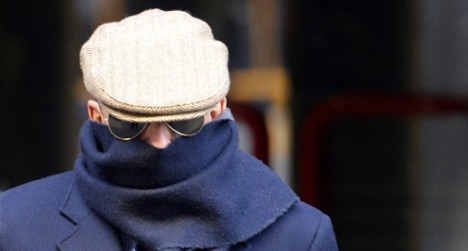 Dozens of angry supporters of the victims demonstrated near the courthouse in the Spanish capital as Juan Antonio Gonzalez Pachecho, 67 — known as “Billy the Kid” — and Jesus Munecas Aguilar, 74, arrived for their hearing.

A federal judge in Argentina has issued an international arrest warrant for them under a doctrine of universal jurisdiction, which opens the way for courts in other countries to try certain cases of human rights abuses.

The Argentine judge, Maria Servini de Cubria, is leading a judicial investigation launched in 2010 which includes allegations of “genocide and crimes against humanity” during Spain’s civil war and the ensuing dictatorship.

Gonzalez and Munecas cannot be tried in Spain because of a 1977 amnesty adopted to unify the country after its military dictatorship ended with the November 1975 death of General Francisco Franco.

The charges lodged in Argentina allege the two Spanish former policeman tortured prisoners in the late years of Franco’s rule.

A court official who requested anonymity said both suspects refused to be extradited.

Gonzalez risks up to 25 years in jail under the Argentine case, the Spanish court said in a written ruling after Thursday’s hearing.

The judge must now rule in a future hearing on whether to extradite them forcibly. The court confiscated their passports and ordered them to report to the court each week, the official said.

The two men left court after the hearing, wearing dark sunglasses and with their faces partly covered by scarves.

“Truth, justice, compensation. No forgiving nor forgetting,” they chanted.

Gonzalez’s alleged victims say he was known as “Billy the Kid” because he used to do tricks with his pistol and because he was a fresh-faced young officer at the time.

Ahead of the hearing, one man told AFP of the beatings he suffered at the hands of Gonzalez’s brigade.

A member of Marxist and anti-fascist groups, Blanco was seized in the street in Madrid in July 1975 by police who accused him of killing a policeman.

“It was like an assault right there in the street. One morning I suddenly found myself surrounded by seven or eight police” from the brigade of which “Billy the Kid” was one of the leaders.

Blanco says he escaped meeting Gonzalez who was not present, but the inspector’s men beat him “with whatever they had to hand: sticks, truncheons, even a heater that they picked up and threw”.

Blanco was one of the 11 last suspects sentenced to death by court-martial under the dictatorship in September 1975, two months before Franco’s death.

Five of the 11 were executed and six including Blanco had their sentences commuted and were released in the 1977 amnesty.

Blanco said that one of those who were executed in that case, Jose Luis Sanchez Bravo, was tortured with electric shocks during his detention and that Gonzalez took part in his interrogations.

In the lead-up to their sentencing, police “came at one or two o’clock in the morning to interrogate us,” Blanco said.

He recalled one officer asking his superior, “Can we torture them?”

“The chief replied: ‘Not now. They have to be presentable for the court-martial.”

Previous lawsuits by families of people killed during the war and under Franco have been overturned under the 1977 amnesty law.

“It would be good for Spain as a country if they were extradited,” Blanco said. “But even better of they were tried here.”