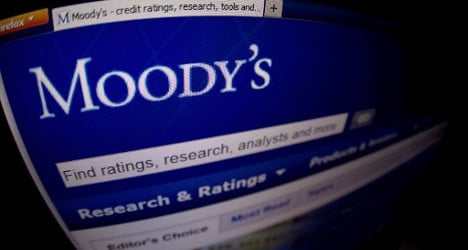 Moody's left the overall rating for Spanish debt unchanged at Baa3 — just above junk-bond level — but the change in the outlook reduced the likelihood of another downgrade as the country works to rebound from its financial crisis.

The move comes days after a similar move from fellow ratings agency S&P which said it would keep Spain's long-term credit rating at "BBB minus, but also raised the outlook to "stable" from "negative".

Evidence that the economy is adjusting to new market conditions, including a push in exports, and improved growth prospects for the medium term "supports Moody's view that Spain's public finances are on a slowly improving trend," the rating agency said.

"The external accounts continue to improve, the situation in the labor market has stabilized and the private non-financial sector continues to deleverage."

"The external accounts continue to perform better than expected, with Spain among the few EU countries to see its export market share increase over the recent past.

"Moody's expects the strong export performance to continue, as competitiveness is supported by very low wage and price increases."

In addition, companies continue to pare their debts, pointing to a stronger private sector as financing conditions loosen.

"The improving economic prospects in turn provide a greater level of confidence that Spain's still elevated budget deficit can be gradually reduced."

Spain officially exited a nine-quarter recession in the third quarter of 2013 when it posted growth of 0.1 percent.

But consultancy PwC warned recently that Spain would have to wait until 2033 to see a return to post-crisis employment and growth levels.