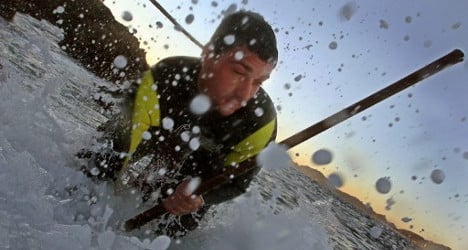 Diners pay handsomely to taste the iodine-tinged flesh of the grey-brown stalks that hold these crustaceans to the rocks, topped by white fingernail-shaped shells.

But getting hold of them here in the cold Atlantic shallows of the Costa de la Vela is no treat.

“The danger is not so much the sea, as the jumping onto the rocks,” says Nando — full name Fernando Marino — a big, vigorous man of 41 with pepper-and-salt hair.

He has been picking the barnacles for 19 years, dressed in a wetsuit with a small net tied to his waist to hold his catch — one of 65 locals from the nearby town of Cangas licensed to do so.

He leaps from a dinghy at the foot of the cliffs as the tide goes out, leaving the rocks wave-lapped but exposed enough to reach the barnacles.

The skill of the good picker, he says, is in quickly identifying the biggest and best barnacles on the spot.

“As soon as the tide starts coming in, it is very dangerous.”

Working against the clock in the two hours before the tide turns, he and other pickers slice the barnacles from the rocks with a wooden-handled, flat-bladed tool called a “raspa”.

“You have to keep an eye out for everything — the sea, your companions, in case anyone falls,” says Marcos Golvanes, 27, who steers the dinghy.

None of the pickers can forget the story of December 13 last year, when a woman picking barnacles died after falling into the sea off the nearby town of Oia.

“We have had the odd scare here when the sea has been rough,” said Monica Gonzalez, the Cangas picking team’s watchman, who stays in the boat. “But we have been lucky.”

Waiting on the boat, Gonzalez weighs the catch, checking it does not pass the legal quota: five kilograms (11 pounds) per person, per outing, in the run-up to Christmas and four kilograms (nearly nine pounds) the rest of the year.

Back on land, she takes the catch to the fish market at Cangas harbour wholesalers examine the barnacles before bidding for them.

“Between now and Christmas, people will pay up to three times more than normal,” said David Fernandez, leader of the local fishermen’s guild.

“Last December they sold for as much as €162 per kilo,” equivalent to about $100 per pound, Fernandez said.

The guild last year sold 17.5 tonnes of goose barnacles worth nearly €688,000 — a valuable asset for this community in the recession-hit region of Galicia.

The final retail price in some cases was more than double the wholesale price paid to the pickers.

Prices have gone down in the recent years of recession in Spain.

“I would say demand has fallen by half in the past three or four years,” said Fernandez.

On this occasion, in the crucial period a month before Christmas, the barnacles caught by Nando and his companions fetched between €26 and 40 — a fraction of the price likely to be paid by the people who eat them.

“The sale wasn’t a good one,” Nando said.

On the rocks, the pickers call out to each other to warn of dangerous waves and secure themselves with ropes to pick in the hardest-to-reach spots.

The goose barnacles, Gonzalez says, thrive where the waves beat deepest and hardest.

“The more dangerous the spot is, the better the barnacles you find there.”