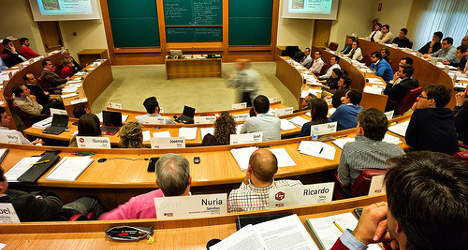 Madrid's IE had "lost one or two places" in some rankings, said the Financial Times but its overall reputation had kept it at the top of the tree. File photo: PromoMadrid/Flickr

Also making it into the top ten were Barcelona's ESADE — in equal third place — and the University of Navarre's IESE Business School  which captured sixth spot.

IE had "lost one or two places" in various rankings, said the Financial Times but its overall reputation was enough to keep it at the top of the tree.

The Madrid-based school has the fourth best MBA programme in Europe, the seventh best Executive MBA (EMBA) on the continent and the fifth ranked Masters in Management programme, the rankings show.

Barcelona's ESADE school was another big winner in the rankings, climbing from 7th place in 2011 to equal third in the 2013 tables.

"The presence of ESADE among the best schools in the FT rankings reflects the school's commitment to excellence in all of its programs over the last few years," said ESADE chancellor Alfons Sauquet in a statement.

This result "indicates the quality and strength of the institution in all areas and its capacity to adapt to changes and help graduates and businesses achieve results," he added.

The FT's European Business Schools ranking rates schools rather than their programmes.

These ranking are based on indexed scores of schools taking part in the other FT rankings including the 2013 FT MBA, EMBA, masters in management, and open and custom executive education tables.

To come up with rankings, survey makers evaluated how international institutions are, how quickly graduates climb the professional ladder, and the level of satisfaction students and business have with the programmes on offer.

The FT rankings also measure graduates' salaries. These show graduates of Spain's masters in management programmes have the second highest average salaries in Europe at $69,000 (€51,000). Only Germany does better: graduates there earn an average $70,000.

For MBA graduates, France's business graduates earn the most at $145,000 while Spanish graduates are hot on their heels, with their pay packet at $144,000.

But Spain's executive MBA graduates are the highest paid on the continent, taking him average salaries of $174,000 compared to second-placed UK where that figure is $170,000.