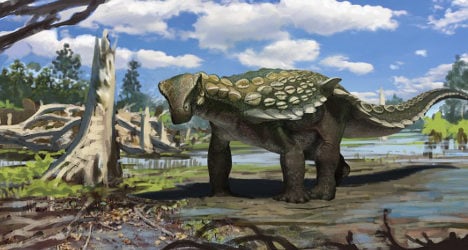 The discovery was initially made in 2011 at an open-pit coal mine in the Spanish municipality of Ariño, in northeast Spain.

The skeleton represents the most well-preserved ankylosaurs ever found in Europe, Spain’s Department of Natural Resources reported.

It is also the oldest known nodosaurid, a subspecies of the ankylosaurs with a wide, heavily armoured body and a spiny side.

Spain’s Dinópolis, one of the largest palaeontology museums in the world, presented the cutting-edge findings on Monday.

Aside from the missing tip of the snout, so many fossils have been recovered from the mine in Ariño that scientists have been able to reconstruct the dinosaur’s skeleton with amazing accuracy.

The new species has been named Europelta carbonensis, which means shield from coal.

They are thought to have lived between 100 and 113 million years ago during the Early Cretaceous period.