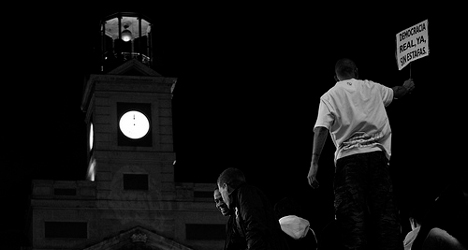 "That's one of the most interesting issues for us, the difference between Spain and Greece," Finn Heinrich, lead researcher of the group's 2013 Corruption Perceptions Index, told news agency AFP.

"You see two quite different responses to corruption in the context of economic crisis, and I think it bodes much better for Greece's prospects then for Spain's."

Spain slipped from number 30 last year to number 40 on the group's list of 177 countries. It scored 59 points out of a possible 100, in a system where higher scores mean less corruption. Greece was further down the list but improved from number 94 to the 80th spot.

The Index results are based on interviews about perceived corruption with over 114,000 people in 107 countries.

"The last couple of years both of them (Spain and Greece) went down because of the euro crisis, which revealed the corruption was one of the contributors to the crisis but also exacerbated it," said Heinrich.

"But this year for the first time Greece is getting better, and I think it shows the government is tackling corruption head-on there. There have been high-profile prosecutions, they have put in place somebody working closely with the prime minister who is coordinating anti-corruption activities."

Heinrich said that "this is not happening in Spain, quite the opposite".

"More and more scandals are getting revealed and the government is not seen as taking those seriously. And those scandals even involve very high-level government people."

"The biggest scandal right now is funding of the governing political party by high-level business interests, particularly those in the construction sector.

"There is the link to the euro-crisis because obviously construction was one of the key bubbles in Spain which then showed that this growth pattern and economic pattern of the country was not sustainable."

Heinrich cited as one example a major corruption case centred on the Spanish resort of Marbella that led to scores of convictions.

"The mayor of the city ruled it as its own fiefdom, where he basically, together with big construction companies, ignored the building laws and got money for expanding the city way past what was legally allowed," Heinrich said.

"That's just one example, and there are many, many more."

Spain passed its new Transparency Law on November 28th. The law obliges all public administrations to publish regular updates on their objectives and activities.

Those administrations also have to publish figures on salaries and compensation, including severance, of top executives. That information will be available to all Spanish citizens.

The law will come into force once published in the official bulletin of state.

The 2013 Corruption Perceptions Index has Denmark in Spain in joint top position, both with scores of 91. Germany came in at number 12 (with 78 points) and the UK at 14 (76 points) while the United States was 19th with 73 points.