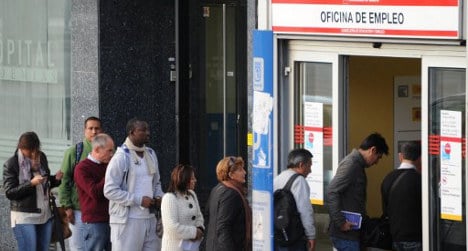 After the destruction of millions of jobs since a decade-long property bubble imploded in 2008, leaving one in four people out of work, the news fed growing optimism that the worst may be over for an economy gingerly emerging from a double-dip recession.

The number of people registered as unemployed in the eurozone's fourth largest economy fell by 2,475 from the previous month to 4.8 million in November, raw figures from the Labour Ministry showed.

When corrected to smooth out seasonal blips, the number of people registered as unemployed fell by a steeper 40,885, the fourth straight monthly decline.

The improvement in the raw figures followed two months of lengthening job queues.

Moreover, it marked the first drop in registered unemployment in the month of November — traditionally a difficult month — since the figures were first compiled in their current form in 1996.

"The latest figures confirm the favourable development in registered unemployment and hiring in the latest months," State Employment Secretary Engracia Hidalgo said in a statement.

The number of people officially registered as being in work dropped by 66,829 people to 16.3 million, the Labour Ministry said.

Corrected for seasonal variations, the number of people in work eased by just 2,828.

"Every day we are closer to net creation of employment where more people are entering the ranks of employment than those that leave," said State Social Security Secretary Tomas Burgos.

"The progress is very fast and can be expected to continue in the coming months," Burgos said.

But it faces a formidable challenge to bring down the staggering level of unemployment in the years ahead.

In the third quarter, Spain emerged from recession with 0.1-percent growth but still posted an official unemployment rate of 25.98 percent, which is calculated in a separate, quarterly household survey.