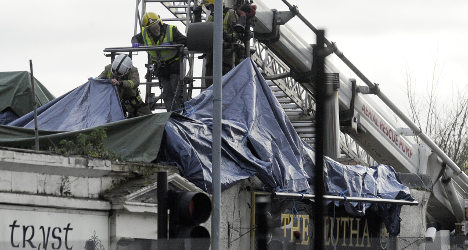 The Scotland-based Spanish dentist said he was speechless for several hours after the accident which saw a helicopter crash into Glasgow's Clutha Vaults pub.

"Suddenly the roof came down, there was a lot of noise, a lot of smoke and everyone started to run," Manuel Cueto told Spain's 20 minutos newspaper.

"I was paralyzed and when the smoke started to clear a little, I saw people, I groped my way along, touched a person whose head was bloody, I picked him up and another guy took him outside," he added.

"It was horrible, seeing what happened there in a question of minutes was something you can't deal with," said the Asturian who was visiting the Clutha Vaults pub for the first time.

Cueto said he helped one another person escape the bar but was unable to rescue more. "It was physically impossible because they were trapped under pieces of wood," he said.

Police on Monday warned that more bodies may still be recovered from the wreckage of the pub.