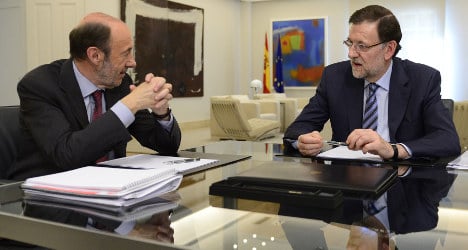 Spain’s ruling conservative Popular Party (PP) would lose 40 seats but still remain the most voted party with 146 representatives in the country’s 350-seat lower house if an election were held now, the poll in Spain’s El País newspaper reveals.

The opposition socialist PSOE party would pick up 21 seats and find itself with 131 seats, the projections based on data from June to December show.

This would leave both parties short of the 176-seat mark needed to form an absolute majority in Spain.

The big gainers in a hypothetical poll would, meanwhile, be the country’s smaller parties. The centrist UPyD party — led by the highly popular Rosa Díez — would more than double its representation from 5 to 11 seats.

The left-wing Izquierda Unida (IU) meanwhile could expect to win 25 seats against the 11 it won in Spain’s last general elections in 2011.

But El País said neither party would win enough seats “to become indispensable in creating a majority”.

Both major parties would also need to align themselves with at least two other parties to form that majority, the paper commented. This meant the political landscape would become increasingly splintered.

Spain’s ruling PP currently enjoys a majority, holding 186 seats. It stormed into power in the 2011 general elections after the Spanish public punished the former PSOE government of José Luis Rodríguez Zapatero for perceived mismanagement of the country’s economic crisis.