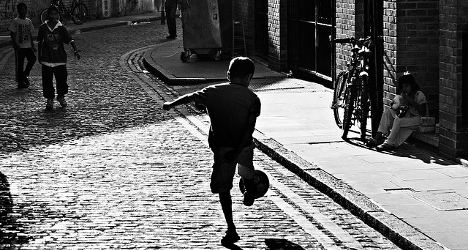 For many kids in Spain’s dense urban centres the streets are one of the few places to play football. These urban spaces provide an informal training ground for a national team which currently holds the World and European champions, and for a football league considered by many to be the world's best.

But the country's street football tradition could be under threat from the latest draft of the Spanish Government's controversial draft Citizen Security Law, passed at a cabinet meeting on Friday.

This draft proposes fines from €100 to €1,000 for "the practice of games or sports activities in public spaces not designed for them".
Those fines will be payable "when there is a risk of damage to people or property" or when the circulation of people or traffic is impeded.
The challenge to street sports is part of a draft reform now likely to pass unhindered through parliament where the ruling conservative Popular party holds a strong majority.
But the progress of this legislation has been dogged with criticism with opposition groups saying it is unnecessarily punitive.
SEE ALSO: Ten new laws that are shocking Spaniards
An earlier draft proposed fines of up to €600,000 ($812,000) for insulting police officers or demonstrating near official buildings including the country's parliament without permission.
Under the new, watered down draft, those offences will instead carry fines from €1,000 to €30,000.
"This is just a makeover of their initial draft bill," left-wing Izquierda Unida deputy Ricardo Sixto told The Local recently.
But Interior Minister Jorge Fernández Díaz stated the new law aims "to strengthen the guarantee of public liberties and security".