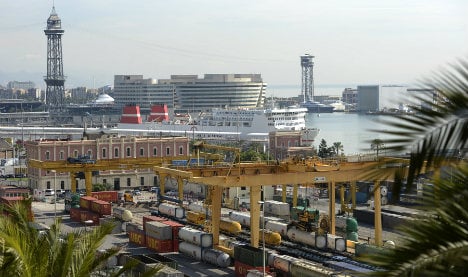 The prospect of relatively high returns in a eurozone economy emerging from recession with a strong corporate presence in Latin America is apparently proving irresistible.

Among the latest converts, Microsoft co-founder Bill Gates snapped up in September a 5.7-percent stake in Spanish construction and services group FCC for €108 million ($147 million).

News of the US billionaire’s decision sent FCC stock surging more than 10 percent in a single day and made headlines in the Spanish media.

“Foreign investment is returning to Spain,” said state secretary for business Jaime Garcia Legaz as he presented a report last month on sovereign funds by the Spanish business school ESADE.

“They are expecting a Spanish economic recovery,” he added.

“It is clear that the perception of Spain has changed. It is improving week by week.”

Spain would enjoy a surplus in its current account — the broadest measure of trade including financial flows — equal to two percent of its economic output at the end of this year, he forecast.

That would be a far cry from the 10-percent current account deficit Spain posted in the depth of the financial crisis, which erupted in 2008 after the collapse of a decade-long property bubble.

Between January and August this year, foreigners ploughed nearly €19 billion in net direct investments into Spain, twice as much as they had in the same period a year earlier.

The money is welcome in a country gingerly emerging from a two-year recession as it narrows its public deficit, boosts competitiveness and struggles with a jobless rate of 25.98 percent.

“The Spanish market is regaining its attraction,” said France’s ambassador to Spain, Jerome Bonnafont, describing the change as “a turning point”.

“There is a clear increase in spontaneous questions from French companies about Spain,” said Richard Gomes, local director of Ubifrance, an organisation that helps French firms to operate internationally.

Sovereign funds are banking on Spain, too, showing particular interest in companies that have a strong presence in Latin America, according to the ESADE study.

Among the most emblematic investments, Singaporean sovereign fund Temasek has ploughed money into Repsol, and Abu Dhabi’s IPIC is now the full owner of Spanish petroleum and gas group Cepsa.

Maria Victoria Zingani, financial director at another Spanish oil giant, Repsol, said Temasek had also approached her company in 2012 as it toured Southeast Asia to lure foreign investors. Today the fund, which has visited Repsol installations in Brazil and Bolivia, holds a 6.23-percent stake in the group.

Sovereign funds are looking for highly diversified companies with long-term growth prospects and a presence in Latin America, she said.

“It is a phenomenon that is growing and will continue to grow,” said ESADE professor Javier Santiso.

The ESADE study identified 82 sovereign funds in the world with total assets of more than $5.5 trillion.

After initially targeting infrastructure and energy industries, they are increasingly looking at the new technology sector while also casting a cautious eye at property, Santiso said.

According to the ESADE study, Asian funds especially from Singapore and China are emerging as the big investors in Spanish companies, a change from just two years ago when Arab funds, in particular Qatar Holdings, were the leaders.

Qatar Holdings took stakes of more than six percent in Banco Santander and energy group Iberdrola, spending more than $2 billion on each investment as it banked on their strong presence in Brazil. It is now the main shareholder in Iberdrola with 8.18 percent of the company.

“Sovereign funds anticipated the return of foreign investors, betting on Spain since 2011,” said Antonio Hernandez, analyst at financial advisory group KPMG, predicting they would continue to do so in 2013.