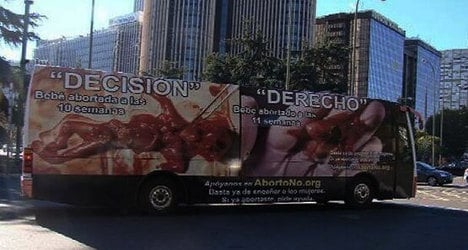 The bus in question shows giant images of alleged 10 and 11-week-old foetuses printed on its bodywork.Photo: Twitter

The bus shows giant images purportedly of 10 and 11-week-old foetuses printed on its bodywork.

The bioethics group behind the eye-opening campaign told Spain's El País newspaper that society "can no longer carry on hiding the terrible reality of abortions".

Under the message "No to abortion", the newly formed Spanish branch of the conservative US group wants "to warn and inform about the business behind induced abortions".

They claim their message is not only a religious but also one which will shed light on the psychopathological scars abortions cause.

Jorge Benito, spokesperson for Spain’s Centre of Bioethics Reform, told Spanish news agency EFE that abortion is a "hidden genocide" and a "massacre".

"Like with the Holocaust or with slavery, people still deny the evidence and say nonsense such as 'unborn babies have no human rights but that abortion is a right'."

Their website abortono.org shows even more disturbing images and video footage of abortions and blood-covered foetuses in a bid to get more anti-abortionists to join their campaign.

Spain's government is currently looking to tighten the country’s abortion law, a decision which has sparked protests such as those seen by the bare-breasted Femen activists in mid-November.

The project has been delayed for the time being, amid reports of disagreement within the ruling Popular Party.

Spain’s current law gives women the right to an abortion on demand for up to 14 weeks of pregnancy, or up to the 22nd week if the mother's health is at risk or the foetus shows serious deformities.

Passed in 2010, the law brought Spain into line with much of Europe. It was one of a series of liberal social reforms by the then Socialist government that angered Catholic Church authorities.

The current conservative government has not yet said exactly what changes it plans, but Justice Minister Alberto Ruiz-Gallardón, in charge of the reform, has said abortion should be banned in cases of a deformed foetus.