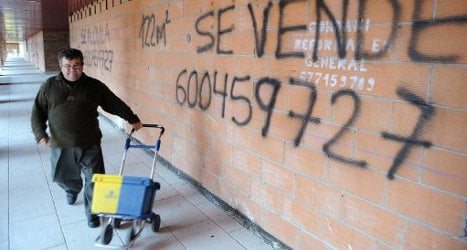 The area of Seseña near Madrid was expected to house some 40,000 people, but Spain's economic collapse meant less than 1,000 apartments were sold. File photo: Philippe Desmazes/AFP

A significant recovery is still a distant prospect for many people, however, notably the 5.9 million in the jobless queue, representing 25.98 percent of the workforce in the third quarter, and many employees suffering from steep wage cuts.

Spain is struggling with the aftermath of a decade-long property bubble that imploded in 2008, throwing millions of people out of work, racking up huge debts for the government, banks and people, and plunging the economy into a double-dip recession.

Spanish employment in the third quarter shrank with the loss of 522,000 jobs over the year.

Domestic demand fell on a quarter-to-quarter basis, the report showed.

Exports remained key, with foreign demand for Spanish goods and services growing, but at a slower pace than in the previous three months.

Prime Minister Mariano Rajoy's conservative government is forecasting a 1.3-percent economic contraction in 2013 and 0.7-percent growth in 2014, a rate considered by many analysts to be insufficient to lead to net job creation.

His Popular Party government, which took power in December 2011, has enacted economic reforms and austerity policies so as to curb annual deficits and rein in the national debt.

But the painful impact of the spending squeeze, high unemployment, and a slew of corruption scandals has sparked angry street protests.

The Bank of Spain, International Monetary Fund and European Commission are tipping an economic decline of between 1.4 and 1.6 percent this year.

The price rise could be encouraging news for investors at a time of market concern over the possibility of deflation — a vicious circle of falling prices, wages and output  — taking hold in the eurozone.

The European Central Bank cut its key interest rates by a quarter of a percentage point this month ECB chief Mario Draghi justified the move by saying that the 17 countries that share the euro "may experience a prolonged period of low inflation."