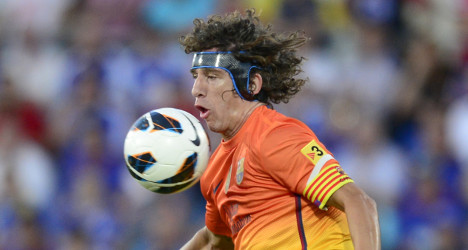 With Jordi Alba, Dani Alves and Adriano all injured, Carles Puyol, expected to start at right back, will be even more critical to Barcelona's defence than usual. Photo: Cesar Rangel/AFP

However, the Argentine remains supremely confident that the players he has at his disposal will have more than enough to get at least the point Barça need to guarantee first place in Group H.

Messi scored a hat-trick in Barca's 4-0 win when the sides last met in September, however he has been ruled out for the rest of the year due to a hamstring injury.

And Martino recognized his absence is a boost for any side that face Barca between now and his return.

"I have said already this week that without Messi we have lost the best player in the world and that always creates a difficulty. If I was on the other side I would see it as a positive, but the quality of the Barcelona squad means there can be no excuses."

A point will not only guarantee top spot in the group for Barca but also mean Martino has started his tenure with an unbeaten run of 21 games, equalling Pep Guardiola's best ever unbeaten streak during his four years in charge.

However, Martino insists Barca will still go out to win the game and he said he is more concerned with equalling Guardiola when it comes to trophies won come the end of the season.

"For us the first intention is also to win. It is clear that every game that Barcelona play, independent of the fact that in cases like tomorrow two results would be favourable, our intention is to win and we don't think about anything else.

"The record tomorrow doesn't mean anything to me. I would prefer to equal Guardiola's record of the 2009/10 season with six titles."

As well as Messi, the Catalans will once again be without goalkeeper Victor Valdes as he too is sidelined until 2014 with a calf injury.

Jose Manuel Pinto will therefore get his first European outing of the season, but the 38-year-old insisted he doesn't feel under pressure to prove his worth whilst Barca's number one remains sidelined.

"I have a normal feeling. I am treating it as a reward for my work and consistency. I don't think I have to show anything. I have the fortune to be able to enjoy these matches."

Jordi Alba, Dani Alves and Adriano also missed the trip to Amsterdam due to injury leaving Martin Montoya as the only senior full-back available to Martino so Carles Puyol is expected to start at right-back.

Xavi Hernandez does return having missed Saturday's 4-0 win over Granada, meaning Cesc Fabregas is likely to move forward into the false nine role vacated by Messi with Neymar moving back onto the left side of the Barca attack.

Meanwhile, Real Madrid will almost certainly be without Cristiano Ronaldo as they look to mathematically seal their place in the Champions League last 16 at home to Galatasaray on Wednesday.

The Spanish giants are virtually already in the knockout stage as they would need to lose their remaining two games heavily having beaten Galatasaray and FC Copenhagen 6-1 and 4-0 respectively on matchday one and two.

However, they can also guarantee first place in Group B with just a point against the Turkish champions.