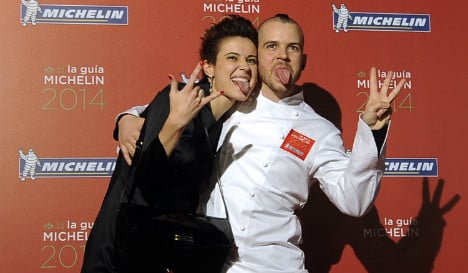 The self-proclaimed "brutal" approach of this tiny eatery, where the cooks rush to add ingredients to diners' plates mid-bite, has made it one of the most unusual restaurants ever to join the world's gastronomic elite.

When on Wednesday it became just the eighth Spanish restaurant to win an unbeatable third Michelin star, DiverXo's 33-year-old head chef David Munoz himself called it a "miracle".

He became the youngest Spaniard to win the top Michelin ranking and DiverXo, whose kitchen measures just 30 square metres (320 square feet) is the only establishment in the Spanish capital to hold the honour.

Arriving at DiverXo, in a nondescript street off Madrid's central Castellana avenue, you wouldn't guess it is now one of the top-ranked restaurants in the world.

There is no porcelain nor silver on the tables.

On entering, the diners see chefs putting the final touches to the dishes in the hallway because the kitchen is not big enough.

"We were looking to make it a brutal experience," Munoz told AFP, with a mischievous grin, as his team worked busily on a Friday morning preparing dinner — the first service since their three-star upgrade.

"What is happening in DiverXo is an absolute miracle," Munoz said. "DiverXo aims to change totally the concept of the three-star Michelin restaurant."

Bearded with a black Mohican in the middle of a shaven head and horn-shaped ear-piercings, Munoz comes from a middle-class Madrid family with no history of professional cooking. He started buying his first creative cook books when he was 14.

Visibly brimming with energy, he works 15 hours a day and has not had a day off in six years.

For the cooks in their black clothes and caps, working in DiverXo is a "rollercoaster", says Munoz's number two in the kitchen, Manuel Villalba, 26.

As for diners, "you have to come here with an open mind," he adds.

"Anything is possible here and you have to be prepared to be surprised."

A line of giant silver ants leads the way to the dining room, which seats 30, decorated with black butterflies and sculpted pink pigs with black wings.

The short menu last two and a half hours, the long one four hours — and each moment is choreographed by the bustling chefs, Villalba explains.

Scarcely has the diner sunk a fork into a raw cod fillet drizzled with boiling olive oil and accompanied by potato skins and pickled chiles, when a cook bursts in and lays on hot mayonnaise.

Later, as the diner chews, another chef arrives with a cream of cod, sea urchin and bacon.

The menu lists not ingredients but rather sensations: sweet, sour and, in the case of one star dish, the "Hannibal Lecter", sharp.

A fiendish ketchup of chile and tabasco makes the dish of duck dumplings and fried ducks' tongues resemble a blood-splattered murder scene.

"Some people end up in a state of shock," said Munoz's wife Angela Montero, 28, a red-haired former dancer who now works as the restaurant's hostess.

While the cooks work, she spends most of the morning answering the telephone. Since the Michelin announcement on Wednesday, DiverXo has received 2,000 bookings from around the world. The waiting list for a table has lengthened to six months.

They hope to survive through a "low cost" version of the restaurant, StreetXo. The Madrid branch of that, separate from DiverXo, has already been a success and the team plans to launch a branch in London in May.

"Getting to this point has had a big personal cost," Munoz said.

The couple opened their first DiverXo in 2007 in another venue, "small, badly located, as ugly as could be," Montero recalls.

They invested all their savings in it and "an infinite number of loans" and both slept there for the first six months.

Reservations there fast filled up, but they had to leave that restaurant's facade unfinished for lack of money.

"People were a bit miffed when they saw that," said Montero. "All we could do was make them fall in love with some great cooking."