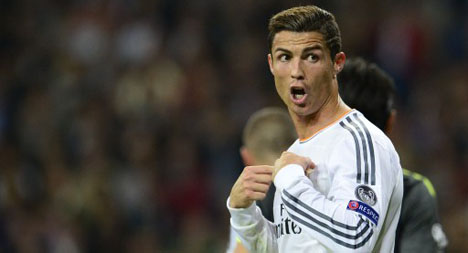 “I don’t think a lot about the Ballon d’Or. I know that it is handed out in January, but I cannot say that I will not go,” Cristian told Spanish radio station COPE. Photo: Javier Soriano/AFP

Ronaldo scored his fifth hat-trick of the season for club and country against Sweden in midweek to ensure Portugal will travel to next year’s World Cup in Brazil and take his tally for the campaign to 31 goals in just 21 appearances.

FIFA’s decision to extend the date for votes to be cast for the award from November 15 to November 29 is also expected to weigh heavily in Ronaldo’s favour with Barcelona’s Lionel Messi, winner of the award for the past four years, sidelined until the end of the year with a hamstring injury.And the former Manchester United man, who was previously crowned World Player of the Year in 2008, refused to confirm rumours that he was considering not even attending the awards ceremony after reacting angrily to comments FIFA president Sepp Blatter made recently about his demeanour on the field.

“I don’t think a lot about the Ballon d’Or. I know that it is handed out in January, but I cannot say that I will not go,” he told Spanish radio station COPE.

“I prefer to not say anything because things don’t depend solely on me. I am not obsessed with the Ballon d’Or. We will see what happens.”

However, worryingly for Madrid’s rivals, Ronaldo insisted he is focusing on continuing to improve his staggering return of 225 goals in 216 games since joining the club over four years ago.

“The best thing is that, right now, I am better prepared and you could say that I am in one of the best moments of my career. I have demonstrated a very high and good level and I hope to maintain that for the rest of my career.”

And, having recently signed a new deal with the Spanish giants tying him to the club until 2018, the 28-year-old reiterated his desire to retire as a Madrid player.

“But truthfully, right now, I feel like I want to end my career here because I feel very happy .I love living in Madrid, I love playing for the best club in the world and I can’t ask for more.”