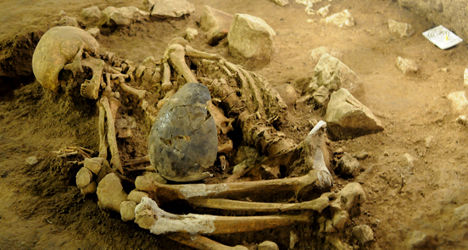 "The funerary rites here are different to those (seen) elsewhere", said Manel Edo, the director of the excavations. Photo: University of Barcelona

The archaeologists from the University of Barcelona found the remains of a 50-year-old man, an adolescent and two children in a cave near the city of Barcelona.

The bodies were in unusually good condition because a rockfall had blocked off the entrance to the cave, researchers said.

But it was the circumstances of the find that were most intriguing.

All four bodies had been placed in an “extreme foetal position” and lined up along the north wall of the cave, and the scientists believe they had been tied together with ropes and wrapped in a funeral shroud.

“The funerary rites here are different to those (seen) elsewhere”, said Manel Edo, the director of the excavations.

He said the rites — which date from the early stages of the Middle Neolithic period — were the first of their kind to be seen on the Iberian peninsula.

Edo also explained the bodies had been placed in fetal position because “that is how you arrive on Earth and how you leave”.

At the site, the archaeologists also found household objects including a double-handed vase, and the remains of two goats and a cow, while the man of the group had a bone pendant below his left arm.

The cave also included the remains of a bonfire, which may have lit during the funeral, the scientists said.