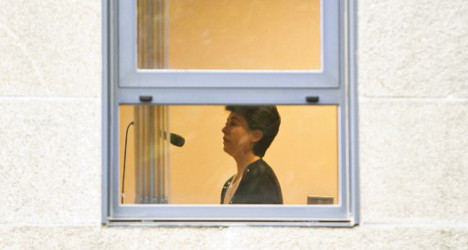 The judge wrote that Porto had given contradictory accounts under questioning and accused her ex-husband of “poisoning the child on at least one occasion with white powders” Photo: Miguel Riopa/AFP

Passers-by found the dead body of Asunta Yong Fang Basterra Porto, a schoolgirl who was born in China and adopted as a baby by the suspects, in a wood in northwestern Spain on Sept. 22.

For weeks since, media have run pictures of the girl’s adoptive mother, Rosario Porto, weeping and wrapped in a purple shawl as police detained her and searched her home.

A 44-year-old Spanish lawyer, Porto previously served as an honorary consul for France in the Galicia region.

Other shots have shown the other chief suspect in handcuffs: her ex-husband, Alfonso Basterra, a bespectacled 49-year-old journalist who is Asunta’s adoptive father.

Then there is a photograph that Asunta had apparently posted of herself, smiling and dressed in a vest and shorts, on a playful blog written in English, describing herself as a “ghost hunter.”

Her adoptive parents were arrested on Sept. 27, indicted for murder on Oct. 18 and remanded in custody. They both denied killing Asunta.

The judge in Asunta’s home city of Santiago de Compostela who is investigating her death had enforced judicial secrecy on the case. But the judge, Jose Antonio Vazquez Tain, caused a sensation this week when he lifted the secrecy order.

He had previously kept sensitive details confidential while he questioned other suspects, but a series of baffling theories had leaked out in the media.

These included a report that semen from a third suspect was found on the victim’s shirt — a suspicion that the judge said had now been ruled out of the probe.

In another now-abandoned line of inquiry, Asunta had been thought to be heir to an inheritance from her grandparents.

In a summary report released on Wednesday, Vazquez revealed ugly details of the accusations against the couple. Porto’s lawyer, Jose Luis Gutierrez Aranguren, dismissed them as “speculation.”

Porto is “considered responsible in collusion with the other suspect of drugging her daughter for three months and of killing her by suffocation on Sept. 21,” the judge wrote in a summary judgment.

“It was he who administered to the child a toxic dose of Orfidal (a sedative)” at his home on that date, to deprive her of all will and defense and presumably to ease the action of asphyxiation, in a plan agreed with Rosario,” the judge wrote.

He added that Porto had given contradictory accounts under questioning and had accused her ex-husband of previously “poisoning the child on at least one occasion with white powders” that have not been identified.

The summary added that the judge had ruled out three other suspects in the case, including a suspected rapist whose sperm was found on the girl’s shirt. Media said it was thought the shirt might have been contaminated while in possession of the police.

“None of what has been said about this makes any sense,” Basterra was quoted as saying by the Correo Gallego, a Galician regional newspaper where he formerly worked. “If the girl took an overdose of Orfidal as they say, she would have been dying as she left my house, and she wasn’t.”

Security camera footage has indicated that Asunta was conscious when she left the house with her mother.

As the news media feed on the grisly allegations in the case, many observers say the story does not add up since the killing lacks a clear motive.

“It seems incomprehensible that the parents would both agree to kill their daughter,” wrote the journalist Fernando Onega in La Voz de Galicia, one of the regional newspapers that have been all over the story.

“Neither Rosario Porto nor Alfonso Basterra are on trial” yet, he cautioned, in an editorial titled “The Mystery of Asunta.”

“I think we have ahead of us a long parallel trial by media.”