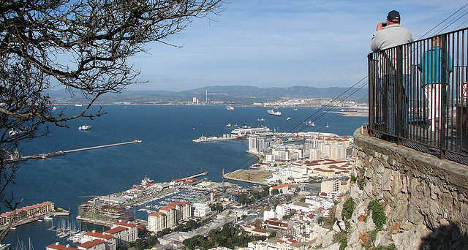 The view down onto Gibraltar's port. File photo: Suzan Marie

Foreign Office minister Mark Simmonds said he wanted to de-escalate the situation but would not put up with "bullying and intimidation" of the British territory at the mouth of the Mediterranean.

Britain summoned the Spanish ambassador on Tuesday to explain the most serious incursion for months in the waters off Gibraltar, which Spain has long claimed as its own.

"We constantly review as to whether the Royal Navy's deployment around Gibraltar is accurate. We are reviewing that at this current time as well," Simmonds told parliament in an emergency debate on the incursion.

He said he wanted a "political solution" to the dispute, adding: "We do not believe that gunboat diplomacy and tit-for-tat escalation is in anyone's interest.

"Bullying and intimidation, wherever it occurs, in unacceptable and that is what appears to be happening in relation to Gibraltar."

The Foreign Office has recorded a huge surge in the number of incursions into British territorial waters since Prime Minister Mariano Rajoy took office in December 2011, and has also summoned the ambassador three times.

There were demands in the British parliament on Wednesday for the ambassador to be thrown out, calls for "real action", plus comparisons made with Iran and Spain's Franco-era dictatorship.

One lawmaker called for the tit-for-tat measure of a special slow queue at London's Heathrow Airport for Spanish passport holders, in response to Spain's introduction of stringent border checks to enter Gibraltar in August.

Picardo said he would support anything that would have a "positive deterrent effect", telling BBC radio: "I have discussed before the possibility of more senior assets from the Royal Navy."

He said the situation was a long way from shots being fired, but warned of the possibility of misunderstandings resulting from Guardia Civil vessels entering Gibraltar waters.

Such ships "might then find themselves shot at because they are not identified as the vessel of a friendly nation… and they may be mistaken for terrorists".

He said the Spanish institute of Oceanography ship was gathering evidence at the order of the EU, on an artificial reef created by Gibraltar in July.