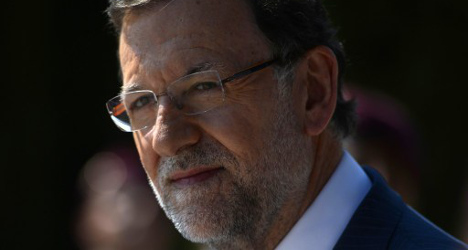 "The jobs situation is bad and that is the main challenge, but we can see some light" at the end of the tunnel, Spanish Prime Minister Rajoy says. File photo: Pierre-Phillipe Marcou

"I think we are now in a position to say that there will not be any cutbacks as big as the ones we have adopted over the past two years," Rajoy said in an interview on national radio to mark the midpoint of his mandate.

Since his landslide election victory two years ago, Rajoy has pushed through unpopular spending cuts, tax rises and labour reforms in a bid to stabilize the public finances of the economy, the  fourth-biggest in the eurozone.

"The jobs situation is bad and that is the main challenge, but we can see some light" at the end of the tunnel, Rajoy said.

European authorities are closely watching to see that Spain follows through on its promises to lower its public deficit, but Rajoy said the intensity of the reforms would ease from now on.

He said he hoped to lower income tax, which his government had raised days after taking power with an absolute majority in parliament.

"These were difficult decisions that no one likes to take, but they were absolutely indispensable and I insist they helped to lay a solid base for the future, to enable growth and create jobs," he said.

He promised no further rise in value-added sales tax in 2014. The government increased that tax last year, fuelling angry street protests and raising warnings that the move would dampen consumption.