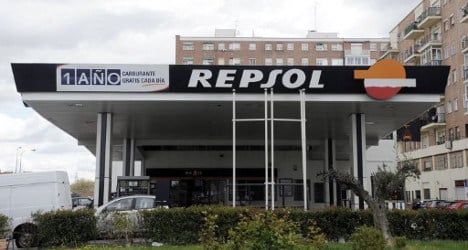 Photo: Dominique Faget
The soon-to-be published research by the US Climate Accountability Institute (CAI) tallies up the greenhouse gas emissions of major energy players.
It shows Spain's Repsol has produced a total of 3.38 gigatonnes of CO2, or 0.23 percent of the total since 1750 through fuel and cement operations.
This makes the Madrid-based firm one of the smaller players in the global warming stakes: the largest single producer was US oil giant ChevronTexaco, which has produced 46 gigatonnes of CO2 over its life, 3.2 percent of the total.
The US firm is followed by Saudi state oil giant Saudi Aramco, which has produced 42.82 Gt of CO2, 2.95% of the total, and ExxonMobil, which has produced 41.6 Gt.
There are thousands of oil, gas and coal producers in the world," the report's author Richard Heede told the Guardian. "But the decision makers, the CEOs, or the ministers of coal and oil, if you narrow it down to just one person, they could all fit on a Greyhound bus or two."
Just 90 firms have been responsible for 63 percent of greenhouse gas emissions, with 83 of those being energy firms, and the other seven cement companies.
CAI has spent eight years working on the research, which the climate campaigner Al Gore described as a "crucial step forward".
Repsol is the 15th largest petroleum refining company in the world, and employs over 40,000 people.
The company posted net income of €1.41 billion ($1.89 billion) in the first nine months of 2013. This was down from the €1.70 billion notched up in the same period in 2012.