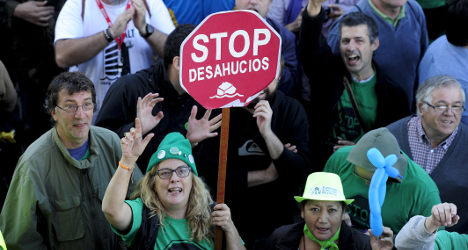 Under Spain's proposed security law, demonstrating near parliament without permission could incur a fine of up to €600,000 ($812,000). File photo: Josep Lago/AFP

The so-called "citizen security" law, expected to be presented soon by the interior ministry, would set civil penalties such as fines for unauthorized protests, burning bins, "insulting" police or picking up prostitutes near schools, media reported.

Under the proposed law, demonstrating near parliament without permission could incur a fine of up to €600,000 ($812,000). Someone "insulting" a police officer during a demonstration could be fined up to €30,000.

The recent years of recession and austere economic reforms by Spain's conservative government sparked mass demonstrations in the streets, including some near the lower house on parliament in Madrid that boiled over into violent clashes between protesters and police.

"The aim of any law is to protect democratic coexistence and ensure the exercising of liberties, and this one is no exception," said the parliamentary spokesman for the ruling Popular Party, Alfonso Alonso.

His counterpart in the leading opposition Socialist Party, Soraya Rodríguez, retorted: "This is not a citizens' security bill, it is a citizen-repression bill."

Speaking in the lower house, she added: "The government intends to punish citizens for behaviour that the courts do not consider offences and that are not deemed such in the penal code."

An earlier 1992 security law, which initially increased police powers to search suspects' property but was later modified, "is known by everyone as the law of kicking down the door", he said.

"This new law, if it takes shape, could be known as the law that gives a kick in the mouth to democracy."