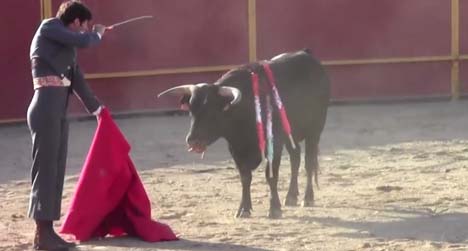 José Antonio Canales Rivera was fined €600 by a court in Spain's southern Cadiz province for causing serious injuries to his horse's snout.

"As far as we know, this is the first time a bullfighter has been found guilty of animal cruelty in our country," the group said on its website.

The case kicked off last February when "deep and bloody injuries" were found above the nose of a horse belonging to 39-year-old Canales Rivera.

Witnesses said the injuries were caused by use of a serrated iron muzzle which dug into the horse flesh.

Experts said such devices meant that every time a horse moved against its riders wishes, the iron teeth of the muzzle would dig painfully into its snout.

It's amazing that in the 21st century "animals don't enjoy the respect and the consideration for being the living creatures they are," said Observatorio Justicia y Defensa Animal of the case.

On Tuesday, lawyers for the bullfighter fought back, Spain's 20 minutos newspaper reported.

They said that Canales Rivera had to use the iron muzzle because so he wouldn't fall of a horse which was "out of control".

The legal representatives stressed Canales Rivera was "a renowned horseman, who knows a lot about and loves horses" and that it "would be absurd (for him) to voluntarily mistreat any horse".

The bullfighter's legal representatives said they still reserved the right take action against his accusers.