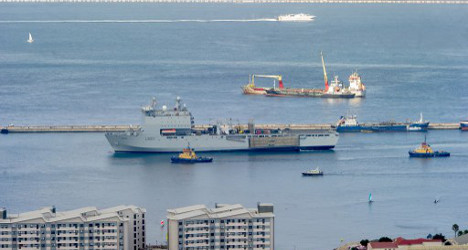 Hague tweeted he had summoned in the ambassador over the "latest unacceptable incursion" into waters of the tiny UK territory known popularly as the Rock.

The decision to call in Spain's ambassador came after the Ramon Margalef, a 50-metre oceanographic survey ship entered the waters at 5pm on Monday and refused to leave, the UK's Telegraph newspaper reported on Tuesday.

This was in spite of repeated by the British Royal Navy patrol boat HMS Sabre for the ship to leave, the paper said.

"We are in the unpleasant situation of a stand-off," a source from Gibraltar's authorities told the Daily Telegraph.

A radio recording of the incident captured by a person The Telegraph described as a local shipping enthusiast has the captain saying: "We are carrying out oceanographic works and have the permission of the Spanish authorities".

A radio recording of communications between Spanish survey ship, the Ramon Margalef, and the captain of British Royal Navy patrol boat HMS Sabre.

"I consider you to be violating the United Nations Convention on Law of the Sea governing the right to innocent passage," the captain of the Sabre replies.

"Your activities are being recorded and reported to higher national authorities," he adds.

"You are to cease your current actions and to leave Gibraltar Territorial Waters immediately."

The ship, however, refused to do so, escalating once more tensions between the UK and Spain.

"I strongly condemn this provocative incursion and urge the Spanish government to ensure that it is not repeated," Europe Minister David Lidington said.

"We stand ready to do whatever is required to protect Gibraltar's sovereignty, economy and security."

Lidington said the Ramon Margalef had undertaken "significant surveying activity in British Gibraltar territorial waters on 18 and 19 November for over 20 hours".

"When challenged by radio, the vessel responded that it was conducting survey work with the permission of the Spanish authorities and in the interests of the European Community.

The minister said: "We believe that it is in the interests of Spain, Gibraltar and Britain to avoid incidents such as this that damage the prospects for establishing dialogue and cooperation."

A British Ministry of Defence spokesman said the ship "unlawfully conducted survey operations for 22 hours in violation of the United Nations Convention on the Law of the Sea".

It said there was no damage to either Royal Navy or Spanish vessels.

Tensions between the UK and Spain flared in July when Gibraltar boats dumped blocks of concrete in disputed waters used by Spanish fishermen.