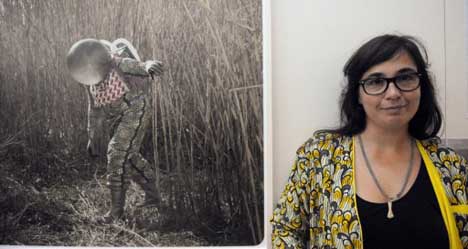 “The Afronauts” has now been shown about 20 times across the globe and won its creator the prestigious International Center of Photography (ICP) prize in New York. Photo: Pius Utomi Ekpei/AFP

Tucked away in her suitcase as she left the country’s commercial capital Lagos for Paris last week was a copy of Nigerian author Amos Tutuola’s 1954 novel “My Life in the Bush of Ghosts.”

“It’s about a child who has to flee his village because of war and goes into this magical place called ‘the bush’, a mystical place in Yoruba mythology where all the ghosts and spirits live,” the 38-year-old Spanish photographer said.

De Middel was in Nigeria for the fourth edition of Lagos Photo, the annual festival that increasingly attracts some of the biggest names in world photography.

This year her celebrated “The Afronauts” was shown alongside new works by Cameroon’s Samuel Fosso, known for taking chameleon-like photos of himself dressed as a range of figures from black African and American life.

The former newspaper photographer is finding her own voice in the art world, blurring the lines between fact and fiction with the aim of taking people out of their comfort zone.

“The Afronauts” was born as she surfed the Internet one day and stumbled across an article on an improbable space program mounted by Zambia in 1964.

“I realized straight away that it was an incredible story that allowed me to give a different point of view about Africa” beyond the old stereotypes of war and famine, she said.

The result was a self-published book featuring photographs of African astronauts in colorful space suits, compiled with letters and articles from the time.

One thousand copies of the book were quickly snapped up, helped by the backing of leading British photographer and collector Martin Parr.

“The Afronauts” has now been shown about 20 times across the globe and won its creator the prestigious International Center of Photography (ICP) prize in New York and a nomination for the 2013 Deutsche Boerse award.

A film, co-produced with the Catalan photographer and documentary maker Pep Bonet, is currently in the works.

Every overseas showing has been a chance for De Middel to explore new ideas, as in China where she came back with “Party,” her own version of Mao Zedong’s “Little Red Book.”

De Middel said the compilation, which was shown at at the annual Paris Photo festival (November 14-17) , was “an adaptation of the communist bible,” containing extracts from Chairman Mao’s book and scenes of modern everyday life in the Asian giant.

She admitted, though, that globe-trotting has taken its toll — not least on where she now calls “home.”

“I’m based in London but I haven’t spent more than 20 days there this year,” she said over tea in a Lagos hotel.

But living out of a suitcase could yet be profitable, as the sketches and doodles in her precious notebooks magically come to life.