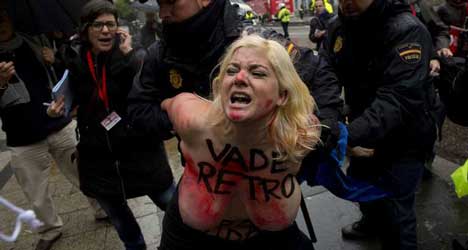 Five young women with messages such as "Abortion is sacred" daubed in black on their chests charged yelling at demonstrators who wore red T-shirts with the slogan "Right to life" as they marched in the cold and rain.

Rallied by a collective of conservative campaign groups, the protestors were demanding a change to a 2010 law that decriminalised abortion.

"We consider abortion to be murder. We want zero abortions," said one demonstrator, Jose Luis Roman, 43, who travelled 70 kilometres (44 miles) from the town of Guadalajara with his wife and two children to demonstrate.

Police quickly swooped in to detain the five Femen activists, after which the protestors carried on marching under umbrellas and red heart-shaped balloons.

"It was a deplorable spectacle. I had to hold back children since they were running to see what was happening," said Arturo Tardio, 55, who was taking part in the march as a steward.

"We all have the right to protest, but all within reason."

Spain's government has promised to tighten the abortion law, but the project has been delayed amid reports of disagreement within the ruling Popular Party.

"That annoys me, but it does not surprise me. They want to please everyone," Roman told AFP, sheltering under an umbrella.

The current law gives women the right to an abortion on demand for up to 14 weeks of pregnancy, or up to the 22nd week if the mother's health is at risk or the foetus shows serious deformities.

Passed in 2010, the law brought Spain into line with much of Europe. It was one of a series of liberal social reforms by the then Socialist government that angered Catholic Church authorities.

The current conservative government has not yet said exactly what changes it plans, but Justice Minister Alberto Ruiz-Gallardon, in charge of the reform, has said abortion should be banned in cases of a deformed foetus.

Sunday's demonstrators demanded in a manifesto that the government ban abortions from the moment of conception and improve the national adoption system.