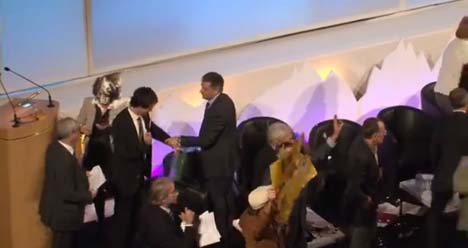 Barcina was left “dazed and disoriented” when first Ovejero pummelled her in “an energetic fashion” and then the three attackers covered her face and clothes with white cream pies. Photo: YouTube

The four men are members of Mugitu, a group formed to fight against the development of a high-speed train network which would run through forestland in the Pyrenees.

They stand accused of "energetically hurling pies in the face of Yolanda Barcina Angulo", president of the north-eastern Spanish region of Navarre.

The right-wing Popular Party leader was attending a public meeting in Toulouse (France) in October 2011 when group leader Gorka Ovejero approached her with a pie concealed in a file.

Spain’s Public Ministry reported Barcina was left  “dazed and disoriented” when first Ovejero pummelled her in “an energetic fashion” and then the three attackers covered her face and clothes with white cream pies.

The pastry might have been easy to shift, but the “humiliation” she suffered could land the men some serious jail time.

At a time when numerous political and royal corruption scandals in Spain have made world headlines for the lack of punitive action taken against the alleged culprits, the objectivity of Spain’s judicial system is being widely called into question.

"This case reveals the very worst side of the Spanish judicial system and its total lack of contact with reality,” defence lawyer Gonzalo Boye told the UK’s The Guardian.

“It shows a corrupt judicial and political class prepared to use public resources to try people that have done nothing more than demonstrate their opposition to the destruction of the forest.

"If these people are convicted, the court will look like a tribunal during the Inquisition rather than a modern court of law."

Spanish online newspaper El Diario reported Ovejero as saying the Mugitu members had never expected to face jail time as they had looked into similar cases in other democratic countries where prison sentences were not given.

"In Belgium (the writer and activist) Nöel Godin and his group have thrown more than 100 pies in the face of important people and they have always been understood to be expressions of surrealist art," Ovejero told El Diario.

"In Spain, authority figures are protected as much, if not more, as they were under the dictatorship. If you throw a pie in the face of your local barber, nothing will happen. But if you do it to a public official, you'll find the great weight of the law coming down on top of you," Ovejero said.

The names of countless Popular Party politicians or Spain’s Princess Cristina are just some of the examples of what Ovejero and his lawyer may have been referring to.

An even more recent example of judicial impunity for critics is that of the Prestige, where an 11-year investigation into the spill of 50,000 tonnes of crude oil on Galician fishing waters and beaches ended with no one being found criminally responsible.