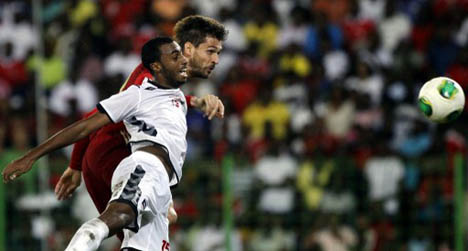 The last time Spain played at the Soccer City stadium in Soweto they won the World Cup final against Holland. Photo: Valentina Lizard/AFP

Equatorial Guinea's exiled opposition leader accused Spain of having received a payment of €15 million in exchange for facing his nation's team on Saturday.

Spain's manager, Vicente Del Boque, refused to answer questions on the subject, saying that he did not wish to get involved with politics.

Spain's next opponents are in confident mood after seeing the world champions struggle to win 2-1 against footballing minnows Equatorial Guinea.

"We should not underestimate ourselves," stressed their coach Gordon Igesund ahead of the match at the 90,000-seat Soccer City stadium in Soweto, where Spain defeated the Netherlands 1-0 to win the 2010 World Cup.

"South Africa can defend, keep the ball, knock it around, and entertain — our objective is to win this match," he told reporters.

"I am telling the nation that we are going to be competitive against Spain. This match will reveal how far we have come since I took over."

Star-saturated Spain, boasting 12 wins, three draws, one loss and a 36-11 goals record this year in all matches, hold no fears for Bafana players.

"We will take the game to Spain and show them what we have," promised midfielder Dean Furman from English second-tier club Doncaster Rovers.

"They are the world champions and have a squad packed with stars from great clubs, but we are not afraid of anyone."

He included seven players who began World Cup final in his squad but chose only midfielder Xabi Alonso to start against Equatorial Guinea.

Alonso, one of four Real Madrid stars called up, retired injured before half-time in Malabo, but Del Bosque said it was a precautionary move.

"It was just a knock — nothing serious," Del Bosque, 62, told reporters.

"It is good to be back in South Africa because we have great memories of this country."

Spain have won the three previous games between the countries, with the most recent success a 3-2 win in Rustenburg to secure third place at the 2009 Confederations Cup.