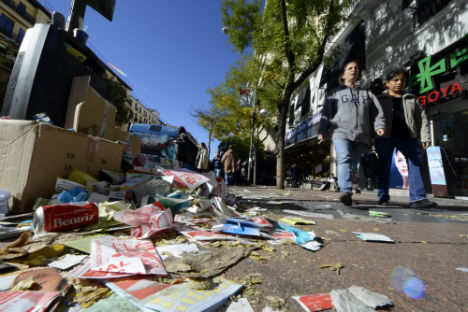 Street-sweepers in Madrid have reached a deal with their employers to end an 11-day strike that has caused rubbish to pile up in the streets of the Spanish capital, unions said.

The strike was launched by unions representing workers who clean the city's streets and public gardens on November 5 in protest against plans to slash 1,135 jobs out of a total of around 7,000, and cut salaries by up to 40 percent.

Unions and the private cleaning companies that employ them agreed on a deal that will involve "no layoffs nor salary cuts", said a spokesman for the UGT union, Juan Carlos del Rio, late Saturday.

The companies said cuts were necessary since the city hall, under pressure to reduce costs like public authorities around Spain, was spending less on cleaning.

The strike did not include the refuse collectors who remove bags of domestic rubbish, but even so the strike had left piles of street trash blocking pavements in this city of three million people.

A public company had started cleaning the streets on Saturday on the orders of the mayor of Madrid, Ana Botella, in the absence of a deal to end the strike.