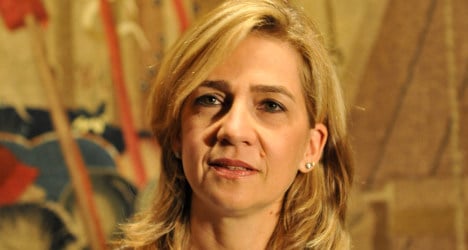 "Mere suspicions or conjectures are not valid elements for an indictment," the prosecutor's office argues. Photo: Nicholas Kamm/AFP

"Mere suspicions or conjectures are not valid elements for an indictment," the prosecutor's office argued, according to a ruling by the court in Mallorca
which is leading the investigation.

The case, opened at the end of 2011, centres on allegations that Cristina's husband Inaki Urdangarin and his former business partner Diego Torres embezzled €6 million ($8 million) in public funds.

The money was allegedly placed in the non-profit Noos Institute, which Urdangarin chaired from 2004 to 2006 and of which Cristina was a board member, for it to organize sports events.

The judge leading the investigation, Jose Castro, named Cristina as a suspect in the case in April and ordered her to appear in court for questioning.

It was the first time a direct relation of the king had been called to appear in a court of law on suspicion of wrongdoing.

But public prosecutors and Cristina's lawyers lodged an appeal, citing insufficient evidence, and an appeals court in May overruled the summons.

Castro then ordered an investigation into Cristina's fiscal affairs and demanded the tax authorities provide him with a report on her property and other assets.

The court in Majorca handling the case will decide whether or not to indict Cristina.

The far-reaching corruption probe has plunged the royal family into its worst popularity crisis since Juan Carlos acceded to the throne in 1975.

Cristina, 48, a manager in the social programmes foundation of the Catalan finance group CaixaBank, moved to Geneva in August with her four children to work on the firm's joint projects with UN institutions.

Her husband, a 45-year-old former Olympic handball player, has remained in Barcelona.

The palace has excluded Urdangarin from its official functions since the judicial investigation was launched in late 2011.