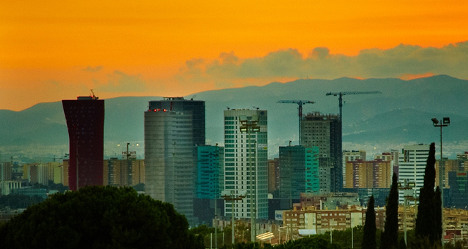 The negative growth for July to September in France stemmed from a 0.6 percent drop in business investment and a 1.5 percent slide in exports, said the country's national statistics agency, the INSEE.

By contrast, in late October, Spain unveiled preliminary figures suggesting it had emerged from a two-year recession to notch up growth of 0.1 percent.

This means the Spanish economy is now outperforming that of France for the first time in nearly five years. In the first quarter of 2009, both Spain and France saw gross domestic product (GDP) growth of  –1.7 percent, according to OECD figures.

Reacting to France's latest growth figures, the country's Socialist government — struggling with rising job losses and a mounting deficit — was quick to dismiss the bad news.

"This is not a recession, it is not an indication of decline," Finance Minister Pierre Moscovici told French radio moments after the figures were released.

In Spain, there was a muted response to the recent news that the Spanish economy had emerged from its technical recession.

"While economic prospects are considerably better than a year ago, particularly in the external sector, domestic weakness is like to hold back any recovery in the wider economy," said a report on Wednesday's data from analysis group Capital Economics.

Germany's gross domestic product (GDP) expanded by 0.3 percent in the period from July to September, slower than the 0.7 percent recorded in the preceding three months, the country's federal statistics office Destatis said in a statement on Thursday.

The European Union is expected to publish preliminary data for the Eurozone, also on Thursday.