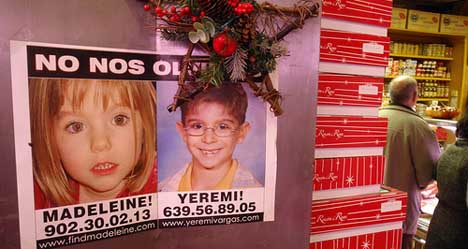 Spain's Civil Guard police force are targeting the three men as part of their investigations into the disappearance of Yéremi Vargas, who went missing on the island of Gran Canaria in March 2007 when just seven-years-old.

Two of those men are now behind bars — one for murdering a woman and sexually molesting her daughter, and the other for child abuse.

Those men refused to speak to Spanish police during a recent visit by officers to the country, sources close to the investigation told Spanish news agency Efe.

A third man, who has been previously being questionned over similar sex crimes without being found guilty, is also of interest to Spanish police

The three Scottish men lived in the same Los Llanos neighbourhood as Vargas when the boy disappeared, . Now Spain's Civil Guard hope that publishing photos of the men in Scotland will help them find Yéremi.

They say the criminal profile of the three men, and the fact they lived on the island at the time when the boy disappeared make them possible suspects.

They are also hoping that one of the UK residents of Gran Canaria who used the cleaning service may be able to shed light on the matter.

At present, there is no evidence that the three men were in the Los Llanos neighbourhood when Yéremi Vargas disappeared.

In 2012, however, an Englishwoman told investigators she had seen the pedophiles in the town of Vecindario on Gran Canaria.

The disappearance of Yéremi Vargas continues to receive a great deal of attention in Spain.

In 2008, the boy's mother told the UK's Daily Mirror that she believe his disappearance and that of English girl Madeleine McCann were linked.

Madeleine McCann went missing in May 2007 from Praia da Luz in Portugal's Algarve region. Despite numerous reported sightings, she has never been found.