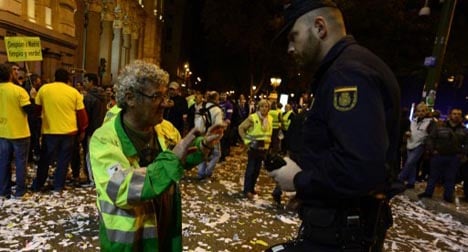 A street-sweeper wearing his uniform speaks with a police officer during a protest against salary cuts and layoffs outside the town hall in Madrid. Photo: Javier Soriano

Ana Botella told a press conference on Wednesday she would be taking the matter to Spain’s public prosecutor's office if street-sweepers do not stick to the minimum services companies are required to offer by law when on strike.

The highly criticized mayor threatened to hire a public firm to carry out the cleaning of the streets of Madrid if the private companies which currently provide cleaning services do not reach an agreement to end the work stoppage within 48 hours.

The street-sweepers strike has left Madrid’s streets strewn with paper, broken glass and other litter, dealing a blow to the Spanish capital's image when it is already suffering a tourist slump.

"Today I was told of the first cancellations. If the strike continues in the coming days, there will be serious repercussions on tourism," said the secretary general of the Madrid Association of Hoteliers, Antonio Gil.

With the walkout in its second week, images of residents of the city of 3.2 million people making their way beside piles of cardboard boxes and torn garbage bags have been broadcast by newspapers and TV stations around the world.

"Madrid looks like a garbage dump," said the president of the Madrid Confederation of Commerce, Hilario Alfaro.

"This comes at the worst moment. We hope that this is resolved before the start of the Christmas season, which begins at the end of November."

Street sweepers and gardeners at public parks began an open-ended strike on November 5 against plans to cut their salaries by up to 40 percent and slash 1,135 jobs out of a total of around 7,000.

The private companies that provide cleaning services to the city already laid off 350 workers in August.

They said cuts were necessary since the city hall, under pressure to reduce costs like public authorities around Spain, was spending less on cleaning.

The strike comes as Madrid is suffering a drop in international visitors even as visitors to Spain overall are up.

During the first eight months of the year Madrid received 2.76 million foreign visitors, a 7.7 percent drop over the previous year. Foreign visitors to Spain rose 4.5 percent during this period.

The alarm of the tourist sector was fuelled by news that in August Madrid airport suffered the biggest slump in passenger numbers among Europe's major hubs and for the first time in history was not Spain's busiest airport, having been surpassed that month by Barcelona's airport.

The capital has since regained its title as Spain's busiest airport but the statistic drew attention to Madrid's failure to market itself effectively as a tourist destination.

September when Madrid lost its bid to host the Olympics for the third time in a row.

"We are going through a low point in Madrid, it is an accumulation of situations which are hurting Madrid's development," said Alfaro.